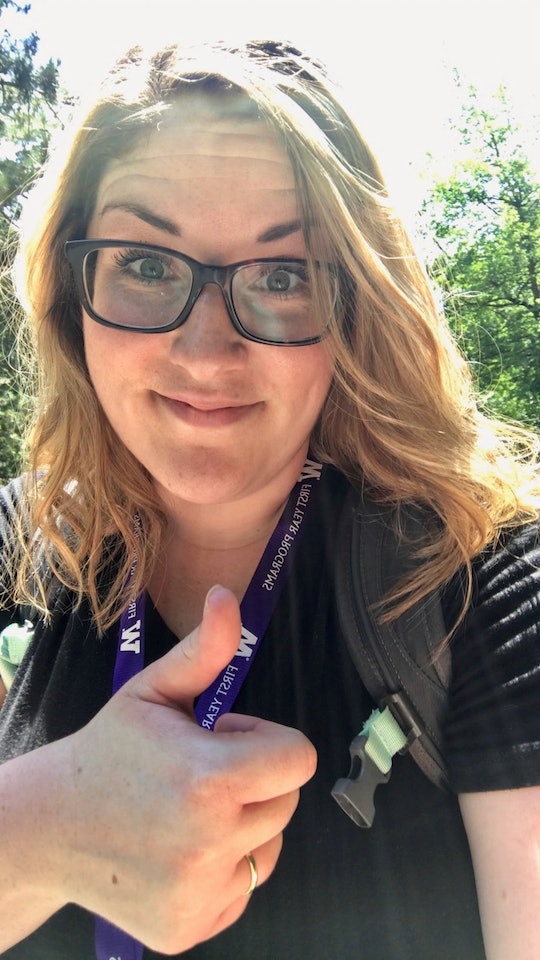 When The Trigger Shot Makes Trying To Conceive Somehow Worse

Jessie has been married for three years and trying to conceive for one year. This is the eighth installment of her Trying diary. You can read the previous entry here.

For this first time in this journey, I started to think about the possibility of it not working. The entirely overwhelming thought that we may not ever become pregnant. It was always there, in the back of my brain, sleeping peacefully with a Do Not Disturb sign. My doctor seemed sure, his nurses seemed sure, and my husband was the surest of them all. Their confidence floated me. Until it didn’t.

This is how I ended up getting an ultrasound wand shoved up inside of me before I had even had my coffee at 8:30 a.m. the day of a group project presentation at school.

During a more recent round of letrozole, we opted to add a “trigger shot” of hCG. I work part-time as a barista, go to school full-time, and volunteer at the speech clinic on my campus, but my cycle doesn’t give a shit what my schedule is. And so, this is how I ended up getting an ultrasound wand shoved up inside of me before I had even had my coffee at 8:30 a.m. the day of a group project presentation at school, and nearly throwing up in my hands on the bus ride home after said presentation.

This shot is meant to induce ovulation within the 24-36 hours of injection, but can only be administered if a follicle in one of my ovaries measures long enough to indicate that it will supply an egg that is ready. On this day, Cycle Day 14, I had one follicle in my left ovary that was ready. Cue injection in my upper butt, doing our bedroom business, and nausea-filled days until the HCG worked its way out of my system.

Many days, and many pregnancy tests later, it was time to check out my numbers with a blood draw and check to confirm or negate pregnancy. On this particularly nausea filled day, the nurse doing the blood draw missed my vein completely. This resulted in the needle being wiggled around for what felt like an eternity (but was realistically closer to a full minute), and me starting to pass out in the chair.

Not only would I not be doing a 'trigger shot,' I wouldn’t be ovulating at all it seemed.

Blood draws had become fairly common place throughout this process, and hadn’t ever bothered me in the past, but the combination of medication and looking down and seeing the empty vial and a needle wiggling around under my skin was enough to make me start to slump in my seat. This bad stick made for a particularly lovely bruise, and after finally giving up on that arm completely and moving to my other, she left a pretty good bruise on that one as well.

The test was negative. For the next several days I got to wear the bruises as a constant reminder of what felt like my own failure. The fear crept in closer, and its full arrival felt imminent. My doctor scheduled another round of letrozole, and we started again, not wanting to lose momentum.

Cycle day 14 came, and this time I was able to better prepare myself for both the intrusive ultrasound, and the shot that I assumed would follow. Only this time, there was one follicle, and it wasn’t even close to mature. Not only would I not be doing a “trigger shot,” I wouldn’t be ovulating at all it seemed. We were out before we even had a chance to try.

My biggest fear was here, and was demanding my attention. There was no escaping it, and the time had come to confront it. So I spoke.

“I’m feeling like this isn’t going to work, and I think it’s time to explore more aggressive options. I’d like to talk about our options for IUI and IVF.”

My thoughts went silent and it felt like all of the blood rushed to my ears as I heard the words come from my mouth. It didn’t mean that we were definitely going to do them, but it meant that they were now officially on the table, and as soon as I said these weighty words, although I was still scared, the big scary thought of this never being a reality for us shrunk in size.

More Like This
My Fertility Journey Began In A Cold Doctor’s Office, But It Was Also Weirdly Romantic
Yes, It’s Possible To Get Pregnant If You Have An IUD
Pelvic Pain During Pregnancy: What Causes It & How To Deal With It
40 Fantastical Boy Names That Start With “F”