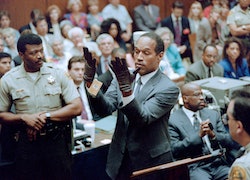 Why Did The O.J. Simpson Jury Wear All Black? Their Color Choice Was An Act Of Rebellion

There was really nothing ideal about being on the jury for one of the most talked about trials of the century. Not only were the O.J. Simpson trial jurors sequestered for the entirety of the trial — months away from the lives they knew — but they were also the center of a lot of media attention. On The People v. O.J. Simpson, the jury wore all black to the courthouse after three deputies in charge of their sequestration were dismissed, and this small move caught the attention of many. But why did the O.J. Simpson jury wear all black? Well, their clothing choice was a major act of rebellion.

When I say that the all black was an act of rebellion, I don't mean it was like a moody teenager who was just fed up with his parents always knocking on their door. The O.J. Simpson jury was mad. During the trial, one juror came to Judge Ito's chamber to explain that she felt violated by the deputies who would search their rooms on a daily basis, according to an interview with CNN. To remedy the situation — or so he thought — Judge Ito dismissed three of the deputies the woman felt were giving her problems. Unfortunately, this did not sit well with the other jurors, as many of them have gone on record stating they didn't feel there was any issues with the dismissed deputies.

In the same interview with CNN, the juror said knew the other jurors were planning something, but she wasn't included in their coup, if you will. She said that the next morning, she got in line to enter the courtroom and noticed that she was one of only a few jurors that didn't have black on.

This act of wearing black definitely sent a message to Judge Ito. The trial was already at a high risk of going to mistrial, and this moment just threatened it even more. Not only was this moment a clear indication of a disgruntle jury, but it also became very obvious that Judge Ito was not in charge of his own courtroom.

After the jurors came into the courtroom in their black attire — 13 of them, according to the New York Times — Judge Ito moved to adjourn for a couple of days to speak to the jurors individually. Because Ito wanted to keep the trial running smoothly, he worked hard to keep the jurors content (a.k.a., not wearing all black and making a not-so-colorful statement).