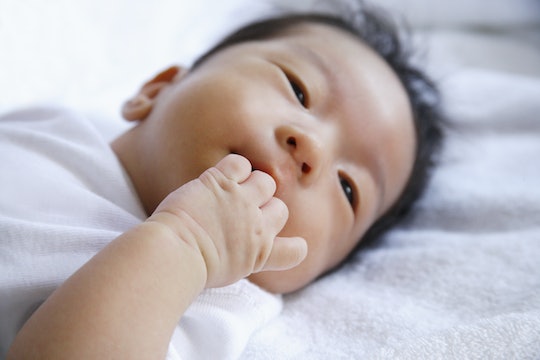 "Once they discover that they have hands, they begin to explore them."

The moment that your baby discovers their hands is definitely a big milestone. It’s the start of baby becoming more independent as those chubby hands begin to reach for things, like toys, a bottle, or your boob. But once they realize that they have hands, you might notice that your baby is constantly chomping on them. So if you’re wondering what’s all the fuss about those delicious little fingers, here’s why your baby keeps putting their hands in their mouth.

Most babies don’t even know that they have hands right away. It’s not until they're about three months old that a baby will figure out those blobs at the ends of their arms are there, and can actually do something, Parents reported. But once they do, it kind of becomes an obsession for your infant, pediatrician Dr. Manasa Mantravadi, MD, tells Romper

“By the time your baby is three months of age, there is a big transformation from a newborn with innate neurologic reflexes to an active and responsive infant who has more voluntary control over his body,” says Dr. Mantravadi. “Babies typically find their hands and spend hours inspecting and watching their movements; in fact, it’s a normal motor developmental milestone to bring hands to mouth.”

But there are other reasons why hand-to-mouth contact starts happening, too. Here are a few:

Your baby might be chowing down on their plump little fingers because they’re getting ready for feeding time. The Centers for Disease Control and Prevention (CDC) reported that your baby will show signs of hunger by putting their hands to their mouth. So if it’s been a while since their last feeding (and you see your baby smacking their lips), they’re probably searching for some food.

If you find that your baby is jamming their hands in their mouth all the time, it could be a sign that their gummy smile will now sport a shiny new tooth, too. “At some point, their teeth start to erupt, and they also come to realize how helpful those hands can be for the teething process too,” Sahira Long, M.D., the Medical Director of Children’s Health Center Anacostia in Washington, D.C., tells Romper. “Hands are the only teething tool most babies can get into their mouths without relying on someone else to supply it, and they don’t have to worry about dropping it." If there’s a lot of drool that goes along with your baby sucking on their hand, it might be a sign that a pearly white tooth will erupt through their gums soon.

They’ve Already Been Doing It In The Womb

Is there anything cuter than getting an ultrasound and seeing your fetus happily sucking on their thumb? Some babies prep for life outside the womb by slurping on their fingers, a study in the journal Developmental Psychobiology reported. In fact, researchers found that around the 36-week mark of pregnancy, fetuses were viewed opening their mouth before touching it, which indicated that they were aware of their own mouth movement. And if your baby does it, it’s just a continuation of a movement that they’re familiar with — and find comforting.

A simple (and perhaps the most adorable) reason for babies constantly putting their hands in their mouth is because they’re there and readily available. “Putting their hands in their mouth and chewing on them is simply another step in the process of discovering their own bodies, how they work, and what they can do,” Dr. Chelsea Johnson, MD, FAAP, a pediatrician and K Health’s Pediatric Lead, tells Romper. “Most pediatricians agree that your baby is chewing on their hands simply because they have found them.” After all, the hand-to-mouth motion is all a part of evolution, according to the study, “Where is my mouth?” Among other findings, researchers reported that “movements of the hand to the mouth are a key motor primitive of the primate sensorimotor system.”

Your baby might also be putting their hands in their mouth as a way to self-soothe. Think about it: if Baby’s binkie falls out (and they can’t get to it), the fastest and easiest way to calm down is by shoving their little hand in their mouth. But hand-to-mouth movement is a very common form of self-soothing that doesn’t end when your baby is little — it continues well into adulthood. Another study found that adults touch their faces up to 23 times per hour, which shows that the self-soothing habit started sometimes in utero or in infancy is something that adults modify into other types of habits, even if they’re not sucking on their fingers.

Being on your back in a crib isn’t always the most stimulating way to spend your time. So when your baby is looking for a toy or two, having their hands at the ready (and all those fingers to wiggle) is an immediate gratification. “Babies putting their hands in their mouths is a very common behavior that can be due to boredom,” says Dr. Johnson. “In most cases, it’s perfectly normal and your baby will grow out of it with time.”

If you find that your baby loves gnawing on their hand, it really isn’t something to be too concerned about. For the most part, it’s something that your little one finds pleasurable and comforting. Eventually, your baby will replace putting their fingers in their mouth with other objects — and that’s when the fun really begins.

This article was originally published on June 27, 2018