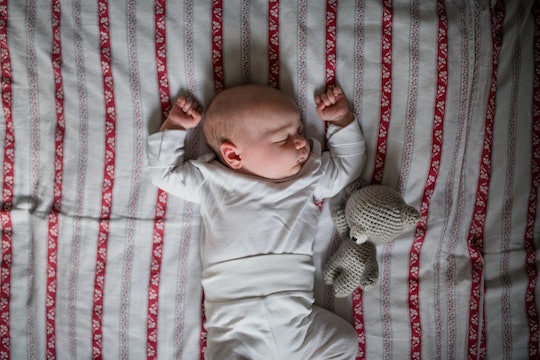 It's just too adorable.

There are few moms who can resist the lure of watching their sleeping baby. Maybe it’s because you finally have a few moments to yourself, and your baby looks absolutely angelic as their mouth forms a pout and they sleep peacefully. But as you gaze lovingly at your snoozing sweetie, questions might arise, like: why do babies sleep with their hands up in the air? (And should you put them back down again?)

From the moment your baby is born, you’re going to be told to put your baby back to sleep. Since 1992, the American Academy of Pediatrics (AAP) has been recommending that healthy babies be put on their backs to sleep in an effort to reduce their risk of Sudden Infant Death Syndrome (SIDS), the National Institute of Health reported. It’s an adorable sleeping position for sure. Babies who are dozing with their arms straight up in the air can look like cherubic cheerleaders sans poms poms. (Or like they’re playing an imaginary game of stick-em-up.)

But if you’re looking for an actual reason why your baby is sleeping with their arms over their head, here are a few possible meanings.

Think about it. If your baby is already sleeping on their back, they’re kind of limited in terms of what they can do with their arms and their legs. And as such, you might find them sleeping with their hands straight up, because, really, what else are they going to do? “Babies have different sleeping positions just like adults do. Many of us may prefer to sleep on our side or our belly in adulthood, for example,” pediatrician Dr. Manasa Mantravadi, MD, tells Romper. “The very simple answer is that they may sleep this way because it is just another position for sleep.” So if your baby sleeps with their arms up, it just might be that’s the position they find most suitable for sleep.

It's Part Of Their Moro Reflex

If you’ve ever witnessed your sleeping baby suddenly startle and fling their arms up in the air, then you’ve seen the Moro reflex in action. As explained in a study of the same name, the Moro reflex is a completely normal reflex in full-term babies. It’s kind of like a knee-jerk reaction to a sudden stimuli (like noise or light), but in this case, your baby will extend their arms and spread their fingers, and there might even be a lengthening of their neck and spine. When your baby has relaxed once again, their arms will most likely rest (you guessed it), still up in the air. Typically, the Moro reflex should disappear by the time your baby is 6 months old or sooner. And if your baby doesn’t have it (or it’s weak), your pediatrician can perform a test to make sure that your little one is meeting this important milestone.

It's Just Part Of Being An Infant

There’s a sweet term for babies who sleep on their backs with their arms (and legs!) splayed out: starfish (via BetterSleep.org). But even though a study from the Better Sleep Council found that it’s one of the least popular positions for adult sleep, babies who are placed in their cribs to sleep on their backs will stay that way — that is, until they start rolling over at around 4 months of age, What To Expect reported. So really, when your baby sleeps with their arms up it’s a testament to the fact that your little one is still in their infancy. “As long as you’re practicing safe sleeping measures, there is no real reason to worry about their arms up in the air during sleep,” says Dr. Mantravadi. “Enjoy watching that adorable position while it lasts — before he or she moves onto another cute pose during their slumber.”

This article was originally published on April 13, 2018