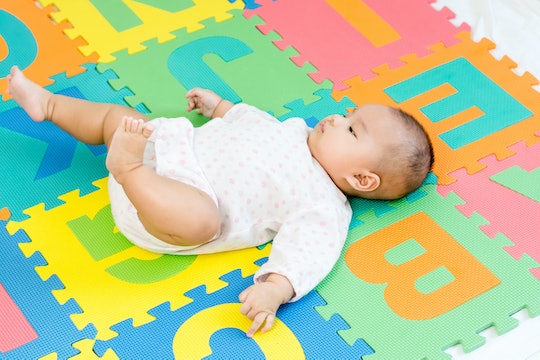 Have you ever put your baby down to play in their little activity center and watched as they jerked their arms and legs back and forth for no apparent reason? That silly movement is something most little ones do in their first year of life, but exactly why do babies wiggle so much like this? As strange as that wiggling may seem, it's actually a totally normal part of their development.

Why Do Babies Wiggle So Much?

Sophie Kay Shaikh, M.D., a pediatrician at Duke University, tells Romper that babies are typically more wiggly from "birth to 4 to 6 months" while they are awake but that "every now and then older babies will still wiggle in their sleep." After about 6 months, the wiggling tends to taper off as a result of brain development, says Sharon Stoll, D.O., a neurologist at Yale University and a Healthline Medical Advisor.

Dr. Shaikh says parents should encourage their wiggly babies during the day by "giving them lots of tummy time and toys to play with." If they're still really wiggly at night, to the point where it's disrupting sleep, Dr. Shaikh advises parents to wrap the baby up in a really good swaddle. If they're so wiggly that they're able to bust out of a traditional swaddle blanket, she suggests some of the zip-up sleep sacks/swaddles to help them feel more secure (and help everyone get some rest).

What Is The Startle Reflex?

Another answer to the question of why do babies squirm is that it’s the result of their natural reflexes. According to Dr. Stoll, "the startle/moro reflex" is a common cause for the wiggling, and explains that it's so pronounced in babies because their brain hasn't developed enough to regulate their reflexes quite yet.

You can typically see when a startle reflex kicks in (it can sometimes seem like the baby is practically trying to jump out of their crib!). Your baby's arms and legs flail out and their body tenses up, then they relax and go back to whatever it was they were doing before. If they're just lying on their back and kicking/punching for no apparent reason, don't worry; Dr. Stoll says this is also perfectly normal as their brain develops.

When Do Babies Stop Wiggling So Much?

Eventually, as the brain continues to develop, the unintentional wiggling will stop (but they'll probably still try to roll away from you to avoid a diaper change). In fact, Dr. Stoll says this is often one of the things pediatricians will look for during well-visits to ensure the brain is developing correctly. Of course, every baby develops at a different pace, so if they're still wiggling past the six-month mark, that's not a reason to panic and call the doctor.

When To Worry About A Wiggly Baby

For some parents, the question of why babies squirm isn’t just for curiosity’s sake, but because they’re worried about their baby’s behavior. While it is absolutely normal for babies to wiggle so much, there are some things that Dr. Shaikh says parents should be on the lookout for, such as "squirming and arching the back" as if they're in pain, "twitching or shaking" that seems to be out of nowhere, or "any 'new' behavior that wasn't there before" like suddenly kicking when they weren't a big kicker before. She says some of these changes in behavior could be a result of "a small cut on their foot or a hair tourniquet" (when a hair or thread is wrapped around a toe or finger).

Another form of wiggling that should raise a red flag is the type that resembles an infantile spasm. According to Dr. Stoll, these are actually little seizures but "look nothing like an adult seizure;" instead, "they look like a startle reflex response, but happen without the baby being startled or having an external stimuli." Dr. Stoll says you'll know it's not a reflex if "their hands go up and their head goes down in a repetitive/quick pattern." She says a baby doing this once or twice isn't cause for concern, but "if it's happening over and over or several times over the course of a few days" parents should have their child looked at as soon as possible. If they are seizures, they can be managed quickly with proper medical treatment. If you're not sure, Dr. Stoll recommends parents try to get a video of the behavior to show their pediatrician to help get a proper diagnosis.

Rest assured, concerning wiggles are the exception, not the rule. Chances are (very) good that your baby's wiggling is completely normal. And while you may be asking, “why do babies squirm so much” right now, it won’t be long before your little one is kicking and punching things on purpose in the middle of a tantrum… so enjoy the cute wiggles while you can.

More Like This
32 Zippy Girl Names That Start With “Z”
What To Do If Your Baby Sounds Congested
When Can A Baby Sleep On Their Stomach? Doctors Weigh In
When Does A Baby Recognize Their Father? A Pediatrician Explains
What Parents Are Talking About — Delivered Straight To Your Inbox

This article was originally published on Feb. 17, 2020