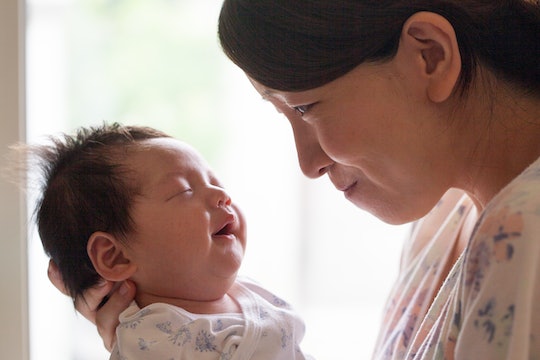 It looks a lot weirder than it actually is.

The other day, my friend texted me a picture of her eight-month-old, asleep in his stroller with one eye half open. “I guess he doesn’t trust me lol,” she wrote. It turns out that while it’s definitely startling to see, it’s not all that unusual to notice your baby sleeping with their little peepers partially open. Still, you’re probably wondering why your baby sleeps with their eyes half open. It may seem odd, but it’s nothing to be concerned about.

Why Do Babies Sleep With Their Eyes Half Open?

“It’s very common for babies to sleep with their eyes half open,” Whitney Casares, M.D., M.P.H., tells Romper. “The medical term for open-eyed sleeping is ‘nocturnal lagophthalmos.’” She adds that it’s not totally understood among the medical community what causes this, but, “we do know that it occurs most often in deep, REM sleep. Babies spend more of their sleep time in this deeper state, so there are more chances for babies to experience open-eyed sleeping.”

Babies spend up to 50% of their sleep in REM cycles (adults, on the other hand, are closer to 20%) and infants can spend as much as nine hours a day in REM, per the Sleep Foundation. The sheer amount of time infants are in a deep sleep coupled with the fact that you may be watching your newborn sleep (you know, when you planned to be showering or napping yourself) means there is plenty of opportunity to spot your little one sleeping with their eyes half open.

Should I Be Worried About My Baby Sleeping With Their Eyes Open?

The short answer here is that if you see their baby sleeping with their eyes partially open, it’s nothing to worry about. “While open-eyed sleeping can be understandably worrisome for parents, it’s perfectly normal and harmless,” Dr. Casares tells Romper. Aside from the initial WTF is happening here parenting moment, rest assured that this is a normal part of infancy.

If your baby's eyes look red or dry after waking up, you can add a humidifier in the nursery to keep their eyes from drying out. And if it’s really freaking you out and you’re not afraid of accidentally waking your baby, you could try gently stroking their eyelids closed.

If you see your child rubbing their eyes constantly, squinting, or being very sensitive to light in addition to sleeping with their eyes open, it’s a good idea to check in with their pediatrician as this could indicate that they are having trouble seeing. And it should be noted that while it’s generally considered harmless in babies, nocturnal lagophthalmos in adults or older children could be a sign that something else, like nerve damage, thyroid issues, or even in rare cases immune disorders like Lyme’s disease or chickenpox, per the American Academy of Ophthalmology. But if your infant is sleeping with their eyes open, they’re still getting good rest

More Like This
Should You Swaddle Your Baby In The Summer? Here’s How To Dress Them
New Infant Safe Sleep Guidelines From The AAP Discourage Bed-Sharing
Why Babies Love Water, According To Experts
The Best Toys For 3-Month-Olds

This article was originally published on June 27, 2017