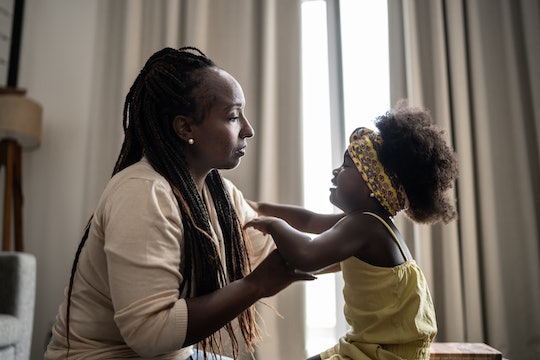 Sure, it’s hurtful, but your kid doesn’t actually hate you.

It seems almost unimaginable, but that beautiful little baby who is gazing lovingly at you may one day grow up and utter those three words. No, not “I love you,” but “I hate you.” These words will be said with such complete conviction that it will shake you to your very core, and make you wonder if you’re the worst mother who ever walked the earth. (You’re not, by the way.) If you’re asking yourself why your kid claims to hate you, there are a few reasons why such a statement might be said — and no, they don’t really mean it.

When your child first says that they absolutely abhor you, it can really make you sick to your stomach. Before you panic, though, just know that kids can be quick to say something hurtful like “I hate you,” but not necessarily mean it. “At some point, almost all kids will say the three dreaded words: ‘I hate you,’” Dr. Amy Nasamran, PhD, a licensed child psychologist and researcher at Michigan State University, tells Romper. “But almost 100% of the time, they don't actually mean it.” Phew. So what’s causing your kiddo to say such a terrible thing?

Kids Say “I Hate You” Because They’re Frustrated

Listen, no one likes being told that they can’t have something, least of all a toddler having a tantrum over another cookie. “Kids get frustrated and upset just like adults, but they don't always have the words to communicate these feelings,” says Dr. Nasamran. “When kids say, ‘I hate you,’ what they really might mean is, ‘I'm frustrated,’ or ‘I'm mad about that.’” Since your child is still learning how to figure out their feelings, a short, direct dagger like “I hate you” encompasses all of those uncomfortable feelings. So, in the heat of the moment, it might be faster and easier for your kid to use a word like “hate,” instead of aptly expressing their anger or frustration instead.

Kids Say “I Hate You” Because They’re Testing Limits

As your baby becomes a toddler, they quickly learn that it’s almost their job to test limits and boundaries — much to the chagrin of parents everywhere. But when there’s parental pushback, it can cause some ugly words to come out of your kiddo’s mouth. “When they don't get their way or can't have what they want, it's common for children to say, "I hate you" as a means of testing how firm your boundary is,” Dr. Nasamran explains. “In other words, they're saying ‘I hate you’ as a strategy and wanting to see if you'll react and let up by giving into their demands.” That’s right, your sweet, innocent child is playing an emotionally charged (and highly manipulative) mind game on you to see if you’ll cave in to their demands.

Kids Say “I Hate You” Because They Want Attention

It doesn’t take too long for your child to realize that they can get a rapid response from you based on what they say and do. Sometimes, it’s something positive (your child gets a good grade on a test), or it can be negative (read: they pulled on the dog’s tail… again). “Children feel strong emotions just like adults,” Kimberly Perlin, MSW, LCSW-C, a licensed clinical social worker, tells Romper. “If they have said ‘I hate you' before and received a strong reaction, they may be using that statement as a tool to get attention even though it is negative attention.”

Kids Say “I Hate You” Because They Need Space

Think about it: anytime your child has said “I hate you,” have they stuck around afterwards? Probably not. Usually, when a child says those three words, it’s followed by stomping off — and quite possibly, a door slam. For a younger child, uttering those unwelcome words might just be a maneuver to score some space, though, says Perlin. “Your child may be so hurt they just want to lash out to get physical distance from you,” she says. While your child is legitimately upset, saying “I hate you” might be an attempt to create some breathing room between the two of you, at least for a little while, until they have calmed down.

When your child says “I hate you,” here’s how to handle it:

It is so, so hard to not take it personally when your child tells you something as serious as the fact that they hate your guts. That’s when you have to take a deep breath, and dig deep to figure out what your child is really trying to say, advises Dr. Nasamran. “It's important for parents to recognize that, although it's easy to take this very personally, when your child says ‘I hate you,’ rarely do they mean it.” Sure, it might mean swallowing your pride for a minute, but try to get past the hateful words to hear what your child is really trying to tell you.

Everyone wants to feel heard, especially your child who might be having a major emotional moment. And that’s when you need to put your own ego aside for a minute to help your child with these heady feelings. “Knowing that what they're communicating is actually more like, ‘I'm frustrated,’ it can help to defuse the situation by validating their emotions,” says Dr. Nasamran. “Acknowledging your child's feelings by saying, ‘I know it's frustrating,’ can help them feel respected and heard.” In short, try not to take it personally when your kid says something mean and hurtful, and let them know that they’ve been heard.

Your toddler is entitled to all of their feelings (the good, the bad, and the downright ugly), but it also doesn’t mean you have to be a dumping ground for their emotional fallout, either. So if your child is upset and says something hurtful to you, give them the space to air their grievances, Marla Starnes, LCSW, a licensed clinical social worker says. But then, help them understand when they need to stop, too. “When a child says they hate you, it can be helpful to validate their feelings of frustration and anger while also explaining why it is not nice or helpful to tell others you hate them,” Starnes says. “The more we can model appropriate emotion regulation and empathy development, the better off our children will be in the long run.” And in that way, your child knows that it’s absolutely okay to be upset, but it is not okay to intentionally try and hurt others with words or actions.

Don’t Punish Your Child When They Say “I Hate You”

You might be fighting off some seriously hurt feelings of your own when your child says that they hate you. But instead of reacting in anger, try not to punish your child for what they’ve said to you, according to Dr. Laurie Hollman, PhD, a child psychoanalyst. “Your child may not even know themselves what they mean exactly but something's bugging them and with their limited vocabulary they are trying to express some emotions that disturb them,” says Dr. Hollman. “Your child shouldn't be punished for trying to communicate.” Instead of sending your kid straight to time out, take the opportunity to get to know your child better by having a discussion about what’s really at the root of the matter.

When emotions are heightened, it’s easy for you to say something negative, but you should avoid name-calling your kiddo in the heat of the moment. “Parents should stay away from naming-calling such as ‘You are being a brat’ or ‘You are just manipulative,’” says Perlin. “A parent’s negative behavior can escalate the situation and encourage the child to make assumptions about his/her character that are destructive long term.” You don’t want your child to think that they are really a brat, challenging, or mean. Be careful what you say in the heat of the moment, because sometimes, a negative label (particularly coming from a parent), can stick.

Turn The “I Hate You” Conversation Into A Positive

It might sound somewhat ironic, but you should actually be proud of your child for saying that they hate you. Why? Well, it shows that your child is connected enough to you to fully express their emotions, Dr. Hollman explains. “You don't have to think of hurt feelings for yourself because you have a little one who loves you enough already to try and tell you their deepest emotions,” she says. “What an opportunity to get to know your child better, for them to know how much you care about their distress, and how proud you are that they are speaking up about it.” It still might sting, but if you look at it from that vantage point, you’ll understand that your child trusts you implicitly with their true feelings — and that’s something to be proud of.

Stand Your Ground When Your Child Says “I Hate You”

No one wants to bicker with their sweet babe, but this isn’t a time for caving in, warns Dr. Nasamran. “While it can be tempting to give in, doing so can teach your child that saying, ‘I hate you’ is an effective strategy to get what they want, and they'll continue to say more of it in the future,” says Dr. Nasamran. “Instead, you can show empathy and understanding by simply validating your child's feelings, but you don't need to punish, put them in time out, or give in to their demands.” At a later point when everyone is calmer, you can talk to your child about what led up to them saying that they hate you, and see how your child (and maybe even you) could have handled it better.

Even though it’s really hurtful when your child says, “I hate you,” you have to understand they most likely don’t mean it. Even if it doesn’t seem like it, it can really be a moment to improve your bond with your child, and if handled properly, can go a long way towards trusting each other for future conversations — even those that might be upsetting. And just remember, at some point, every kid says that they hate their parents, so when it happens, you’ll be plenty prepared for this important (yet miserable) milestone.

More Like This
From Captions To Gifts, These Are All The Kindergarten Graduation Ideas You Need
Fun Ways To Celebrate National School Nurse Day
26 Toddler Lunch Ideas They’ll Actually Be Excited To Eat
These Stepmother's Day Instagram Captions Are Straight From The Heart