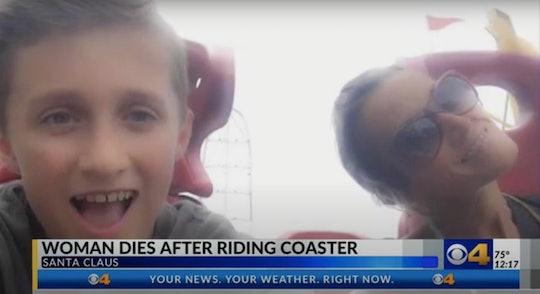 Dawn Jankovic loved riding rollercoasters with her 17-year-old son Gunnar. It was their “thing,” Gunnar’s dad Gary Merker told Fox 8, something the mom and son did together often. Sadly, on June 4, the two were riding one rollercoaster they had visited before at Holiday World & Splashin’ Safari in Santa Claus, Indiana when the unthinkable happened. The Brunswick, Ohio woman was found unresponsive after riding the rollercoaster and now she is being remembered as a “loving mom” whose “son was her whole life.”

Jankovic loved her family, rock and roll music, and visiting amusement parks with her son. “She was a loving mom,” her son told Fox 8. “She loved going to different places, parks and all that.”

Gunnar and his 47-year-old mom were having a great day at Holiday World & Splashin’ Safari when they decided to ride a wooden rollercoaster called The Voyage. One they had ridden many times before. This coaster is 1.2 miles long, has one of the steepest drops of any wooden rollercoaster in the world, according to the Holiday World & Splashin’ Safari website, and prides itself on lots of sharp turns and banking corners.

“She was fine, the whole entire day,” Gunnar told Fox 8. But when they were on The Voyage, Jankovic became unresponsive. A Facebook post from the amusement park detailed how the park emergency services tried to revive her before having her transported via ambulance to Memorial Hospital in Jasper, Indiana, where she later died.

The Voyage was closed for the rest of the evening “out of respect for the family.” The park also noted that a “full inspection of the rollercoaster was performed, and it was determined that the ride operated as it was intended to.”

“Holiday World & Splashin’ Safari officials ask for your thoughts and prayers for the Guest and her family, as well as for Team Members who were onsite,” added in its statement.

A woman died on a roller coaster she was riding with her son.

As The Indy Star reported, autopsy results from Dubois County Coroner Katie Schuck concluded that Jankovic had died from three causes: exsanguination, avulsion of the right internal thoracic artery, and amusement park rollercoaster. Essentially, she had a tear in an artery outside her ribcage that caused her to suffer “severe blood loss internally” from the force of the ride. Schuck explained to The Indy Star that Jankovic’s death was “accidental” and the tear was caused by the “normal force” of the rollercoaster.

While fatal internal injuries from rollercoasters are incredibly rare, they have happened in the past. A 2005 report from Injury Prevention notes that 18 people died on rollercoasters across the country between 1994 to 2004 from internal health issues that were caused or exacerbated by riding a rollercoaster. A further 15 people died from cardiac problems or intracranial hemorrhages within that same time period.

The tragic death of Jankovic has led Gunnar to start a GoFundMe page to help out with funeral costs. He was trying to raise $4,000, but that number has more than tripled since he first posted it. Gunnar wrote a loving tribute to his mom on the GoFundMe page, saying he and many others would miss her. “RIP Mom you will be missed by your family members, the coaster community, and me your son. RIP Dawn.”