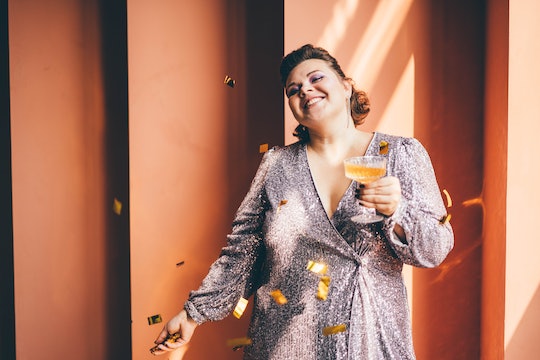 On Being A Woman Who Talks Too Much

And there I am again, reminded to make myself smaller. Quieter. Reminded I’m not as funny or interesting or as loved as I think. Reminded that no one really wants to hear from me.

As a little girl, I was a storyteller, which also means probably I lied a lot. Invented stories on the bus ride home from kindergarten to tell my grandpa, who would have been great at improv since he never failed to “yes and” me. Stories of a new pool at school where a shark was dropped in by a helicopter to attack the students who dared go for a swim. Stories of teachers who were struck blind in the middle of class, of kids eating spiders dipped in chocolate for lunch. I was bursting with stories, and he never, not once, told me to stop. I could talk and talk until my throat was sore and he would say “mm-hmm” or “Wow, you’re kidding? I can’t believe the principal allowed sharks on school property” and never once told me to knock it off. Never once told me I talked too much. That would come later and with other people. When I was around 9 years old and became round. I look back at photos and think I was just a delicious little thing then. Round and happy, running around in the sunshine with my Dorothy Hamill bowl cut and my teal disco shorts. Writing stories, eavesdropping under kitchen tables, scabby knees and no front teeth. Reporting the gossip of the street back to my family: This person was screaming at her husband on the sidewalk. That one got a new puppy, and I’m allowed to come over to pet him twice a week.

I remember telling my Falcon Crest tales in the kitchen, working myself up to my crescendo, my little arms gesturing, when an aunt or an uncle or a cousin or whoever would get this mean little smile and say “You talk too much.”

There is no answer to that. I didn’t know that then, but I know now. That ends the conversation. That’s it, right there. There’s no joking your way out of it, no arguing. Especially not when the next part comes. When two or more people look at each other and smirk, like “Ha! Got her.”

So what you do is you just stand there and smile, like “Hardy har har, totally right? I’m so ridiculous right? I’m in on the joke though so it’s OK.”

Except never, not once in the past four decades, was I in on the joke.

What I have learned from being told I talk too much is this: Sometimes, I do, in fact, talk too much. When I’m not sharing space with people, when I’m interrupting, when I’m on a tangent and basically breathing out my nose so I can keep up my stream of chatter. That’s too much. But do you know what? No one ever tells me I’m talking too much in those cases. I figure it out for myself when eye contact turns into sidelong glances or blank-eyed stares. I take a breath. I stop. I give the floor to someone else.

And there I am again, a round little 9-year-old girl stopped midsentence, my smile sort of frozen on my face and my throat so thick with shame I couldn’t talk even if I tried.

I have also learned that I am told I talk too much when I’m at my happiest, my most confident. When I’m at a party, for instance, and saying things to people that make me feel like we are all part of this immensely true thing together. A thought, a memory, a big life moment that feels funny or wise or true or heartbreaking. This is when I get it. When someone at the party, someone who is usually watching me, head cocked, sly grin dialed down to the halfway mark, says loudly, “You talk too much!”

And there I am again, a round little 9-year-old girl stopped midsentence, my smile sort of frozen on my face and my throat so thick with shame I couldn’t talk even if I tried. My face is red; God, it’s always red when this happens even if I try to hold my blush inside my chest.

And there I am again, reminded to make myself smaller. Quieter. Less seen. Less heard. Reminded I’m not as funny or interesting or as loved as I think. Reminded that no one really wants to hear from me. And maybe the whole time I was talking and thinking I was just so much a part of the gang, the sound of their laughter was really the clock ticking. My time was running out.

The aftermath of being told I talk too much makes me quieter and then the accusations come. Now you’re sulking. Oh, come on, take a joke. Oh, wow, she can actually shut up. There is no winning.

I will admit I think it’s a little bit about size. Especially when the “you talk too much” so frequently comes from people who also say things to me like “you’re really confident for a woman your size.” So, you see it, was no great leap there. I didn’t hear that I talked too much until I got a little rounder, a little bigger. When my belly stuck out, sometimes, from under my T-shirt as a kid. Then it started to happen everywhere.

The big reminder that I am never, ever to forget my big body, and the truth is I forget about my body all the time. When I’m talking, at a party, happy. Social. Loving my people and loving connecting and loving who I am in that moment.

It’s in the silence when I remember. And I think that might be the point.

They were finding their voices. Stretched out on the couch, their words unfurling like streams of consciousness that had almost nothing to do with me.

Kids talk a lot. All the time. My own kids talked so much that I would give gentle limits like “You can only use ‘and’ three times in this sentence” or “You can tell me three stories about Sonic the Hedgehog today, so choose wisely.” They were finding their voices. Stretched out on the couch, their words unfurling like streams of consciousness that had almost nothing to do with me. They were learning how to live in their heads a little, separate from the way they looked to the world or how they were seen. Little entertainers on the stage of my life, and I refused to get out the big hook to pull them off.

Just like my grandpa refused to pull me off stage. He should have warned me, maybe. That someday people would hurt me for talking. That people would need me to take up less space and they wouldn’t even want to fill it with anything. They just wouldn’t want me to have it.

I guess he didn’t warn me because he thought I was fine the way I am. He thought talking a lot was fine. That being a modest, shy, fragile little girl would never be me. And he liked that.

And I guess so do I.