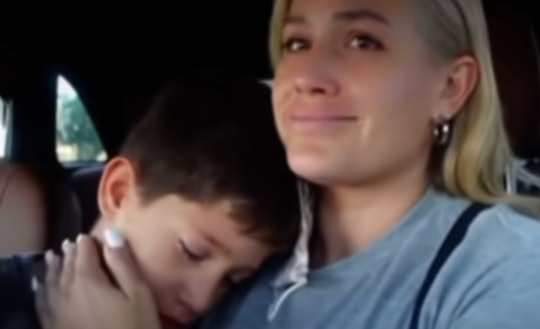 “It’s not OK, it’s wrong on so many levels. He will not be in my content moving forward.”

A popular YouTuber has deleted her channel and social media presence after facing serious backlash for posting a video of her crying son. Last week, Jordan Cheyenne uploaded a video on her YouTube channel of herself appearing to encourage her son to cry for a thumbnail, despite the fact that he was already crying over their sick puppy. As the deleted video, which was screen-recorded and then reposted, has since gone viral on social media and garnered headlines, here’s what you need to know.

Who Is Jordan Cheyenne?

Cheyenne is a 30-year-old single mom to her 9-year-old son Christian and has been posting content on her YouTube channel for the past eight years. She had amassed more than half a million subscribers before she deleted her channel.

Through the years, Cheyenne, who is based in California, has shared personal stories about her journey as a mother, as well as weight loss advice and beauty tips. Cheyenne also ran a website called Girl Boss Academy where she taught the “ins and outs of how to actually become successful on YouTube and Instagram,” according to a 2018 interview with business mentor Marie Wold. Her website appears to have been deleted as well.

Cheyenne also had an Instagram account (@jordancheyenneofficial) with more than 120,000 followers, which has also been deleted in the days since she posted the controversial video.

In the since-deleted video uploaded to her YouTube channel last Wednesday entitled “We Are Heartbroken,” Cheyenne filmed a moment with her son sitting in their car after reportedly learning that their newly-adopted puppy, Rosie, had contracted parvo, a highly contagious and often deadly disease. The video initially appeared to show the mother asking her followers for their prayers and comforting her son, but an unedited clip seemed to show her attempting to stage an emotional moment with her son.

As Christian cries in the passenger seat, Cheyenne asks him to come closer and put his head on her shoulder. She then says, “act like you’re crying,” and when he responds, “No, mom, I’m actually seriously crying,” she tells him she knows and gives him direction about how to pretend to cry. Cheyenne tells her son to “let them see your mouth” and then turns his face to look at the camera as he continues to cry.

Jordan Cheyenne is coming under fire.

The Backlash Has Been Severe

Although Cheyenne deleted the video, it was recorded and then re-shared on YouTube and Twitter where it’s been viewed millions of times. Some have accused Cheyenne of “traumatizing” her son.

“Jordan Cheyenne is out here traumatizing her poor kid, can you imagine being sad and then have your own mom put a camera in your face and DIRECT YOU on how to cry on camera,” wrote one social media user. “Like do you even care about your child?!”

Another called out the world of “mommy vlogging” in general. “At this point, it is becoming a quarterly event in which ‘family-friendly’ mommy/family vloggers have a SERIOUS mask slip moment. Its seriously unsettling what their lives are really like behind the scenes How long are we going to allow this abuse to happen in plain sight?”

In a video on her Instagram Story, Cheyenne said that she’d been receiving death threats and harassing messages, so she’d be taking a few days away from social media. “I f*cked up so f*cking bad,” she said through tears. “I’m so upset with myself. I am being as hard as possible on myself and dealing with this in private.”

Cheyenne addressed the situation and issued an apology in a video on her now-deleted Instagram account and YouTube channel. “I wanna come on immediately and address this... I am absolutely, genuinely horrified and disgusted with myself that I got to a place where I made Christian pose with me for a thumbnail in such an emotional moment rather than prioritize his mental health,” she said on Instagram. “I am horrified, so disappointed in myself I can’t even tell you. It’s not OK, it’s wrong on so many levels. He will not be in my content moving forward. I’m completely restrategizing what to do for the future.”

On Thursday, Cheyenne appeared The Dad Challenge podcast where she talked further about her plans to stop including her sons in her social media posts from this point forward.

Cheyenne stressed this again in a statement to Insider: “I'd like to say I am deeply upset and horrified with myself that I even got to this point, prioritizing my son's mental health should've been the first thing on my mind and I can't say how disappointed in myself I am. I love Christian with everything I have, I'm so disappointed I got to this place and did not prioritize his mental health and emotions on such a difficult day. I absolutely cannot say how genuinely disappointed in myself I am.”

For now, Cheyenne appears to still be off social media.