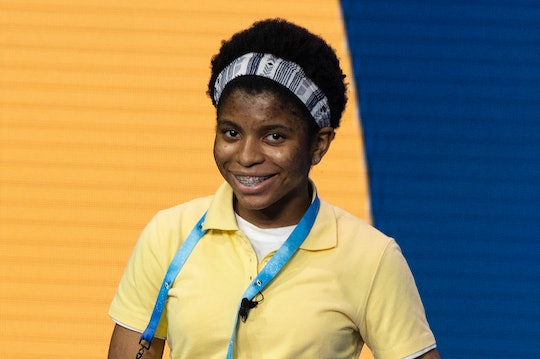 Another case of #BlackGirlMagic!

For the first time in the Scripps National Spelling Bee's 96-year history, an African American contestant has been crowned the W-I-N-N-E-R! Fourteen-year-old Zaila Avant-garde became the first African American contestant to win the competition. She first tied for 370th place in the 2019 competition only to come back two years later and become number one! In addition to her title, the eighth-grader will also receive a $50,000 cash prize.

The competition began with 209 spellers and 11 of them made it to the finals on Thursday night at the ESPN Wide World of Sports Complex at Walt Disney World Resort in Florida. Zaila’s winning word was “murraya,” a group of “tropical Asiatic and Australian trees having pinnate leaves and flowers with imbricated petals,” according to Merriam-Webster.

The only other Black winner before Zaila was Jody-Anne Maxwell, representing Jamaica, in 1998. But winning the national spelling bee is only one of the New Orleans native’s great accomplishments. Zaila also holds a Guinness World Record for the most bounce juggles in one minute, using three basketballs. According to a video posted on the official Guinness World Records’ Twitter page, Zaila started playing basketball when she was 5 years old and one of her aspirations at the time was to be the spelling bee champion.

“I really enjoy reading and words in general,” she told Guinness World Record in a March 2020 video. “I am a speller who hopes to one day win the Scripps National Spelling Bee.” Zaila also finished writing a 1000-word novel! Way to go!

Zaila received kudos from hundreds including, First Lady Dr. Jill Biden who congratulated the teen on her Twitter.

Aside from spelling, Zaila also aspires to go to the WNBA and become an archaeologist, according to Guinness World Record. As time continually shows us, the sky is the limit!