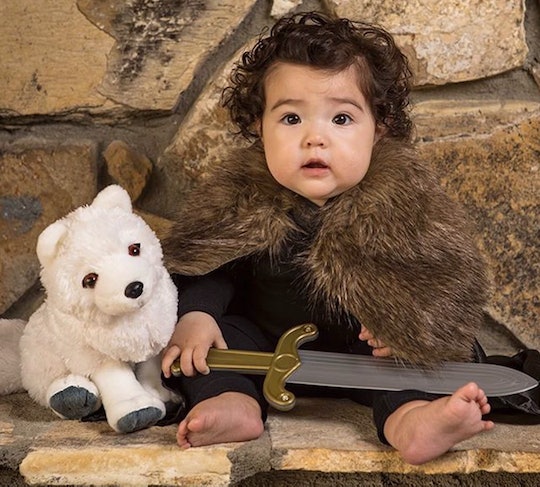 It’s common knowledge that miniature versions of things are far cuter than their full-sized counterparts. You know, like how cupcakes are better than regular cakes, those popular tiny cooking videos are more adorable than the normal ones, and, obviously, babies are infinitely more adorable than everyone else. So naturally, dressing up babies like pint-sized TV show characters is a thing now. And of course it is. Babies dressed up as mini versions of full-grown people is the best thing to happen to this planet. I fully stand by that statement. Especially when it comes to the babies decked out in Jon Snow costumes who are taking the internet by storm. I mean, just look at those tiny faces with facial hair. I can’t handle the cuteness.

Honestly, these little GoT fans in the making are playing the ultimate game of dress-up. I’m not even a die hard Game of Thrones fan, and I can still appreciate the glory of this internet movement. With Halloween approaching and so many adorable kids’ costumes available, I am holding out hope that a vast majority of kiddos I encounter will be little Jon Snows. I hope these adorable babies will help tide you over until the show returns... or until an HBO spinoff premieres. For now, jut thank these people for dressing up their babies as the King of the North.

Brace yourself: Cuteness is coming.

(Just a warning, there are a few spoilers below so if you're not all caught up, read on at your own risk.)

More Like This
20 Ways To End Your Elf On The Shelf For Good
15 Elf On The Shelf Ideas That Involve The Family Pet
If Your Kids Love Their Elf, You Don't *Have* To Put Him Away On Christmas
Experts Don’t Want You To Leave Your Fake Tree Plugged In