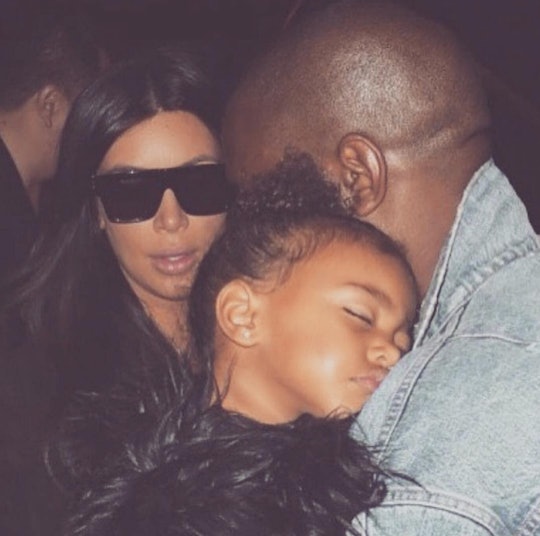 Genetics, even to non-scientific people, can be utterly fascinating. I remember staring intently at my son's first 3D ultrasound and trying to match each of his facial features to my husband, myself, or any of our relatives. I was sure he had his dad's chin and my eyes, but now people often say he resembles my mother. It's mind-boggling how much of a lottery it when wondering whose traits your child will inherit. But for some, there's absolutely no denying who they took after. There are plenty of celeb babies who look exactly like their dad that it's almost eerie.

More Like This
What You Need To Know About Sunscreen For Your Baby
18 Best Sand Toys In 2021 For Babies, Toddlers, & Kids
A 25-Year-Old Mom Thought She Was Pregnant With 7 Babies. She Gave Birth To 9.
These Smart Bassinets Might Get You A Full Night's Sleep

You've probably already noticed that looking a lot like someone else is fairly common in Hollywood. For instance, Zooey Deschanel and Katy Perry are just two of the many famous celebs who could easily pass for twins. So it's no surprise that stars with such recognizable faces and attributes would end up passing on some of their famous facial features to their own children.

Though it's still a flip of the coin to predict what the gender will be or what color hair and eyes a star's child might have, these celeb babies and their dads might be a good idea of what their future siblings will look like.

Blue Ivy may have inherited her style from her mother, but she definitely got her looks from Jay Z.

Though Camden Lachey definitely got his mother, Vanessa's, soulful eyes, he definitely takes after daddy Nick.

Who knows if the rock inspiration behind Axl's name combined with his mom's star power will lead him to the mic one day, but looking like his dad may take him to the big screens, too.

Here's guessing that Winnie's future will be chock full of cameos, comedy sketches, and practicing impressions in the mirror.

Even though big brother Mason definitely looks like his mama's side of the family, Penelope clearly has the confidence and swagger of her dad, Scott Disick.

There's no questioning where North West inherited her stoic pose from. Dad Kanye West is teaching her well.

People used to say Prince William was the spitting image of his mother, the late Princess Diana. Now it seems Prince George is the mini-me of his father, too.

If they ever need someone to play a young Will Turner in a Pirates Of The Caribbean prequel, look no further than Orlando Bloom's son, Flynn.

Perhaps baby Freddie is just prepping himself for belting out the big notes like his dad Louis Tomlinson.