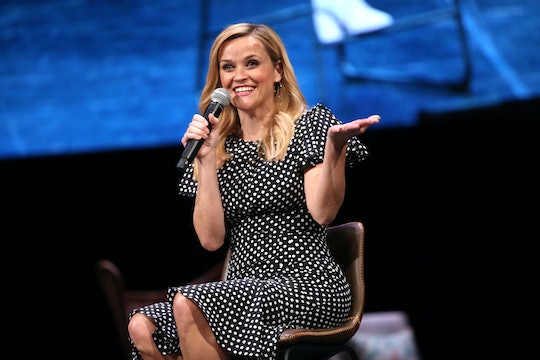 Celebrity Moms Are Participating In the 10 Year Challenge, & It's So Much Fun

By now, the 10 year challenge has likely taken your Facebook news feed, Twitter feed, and Instagram feed by storm. Over the past few weeks, people have shared side by side photos of themselves from 2009 and 2019, showing off some serious transformations. But no one remains more unchanged than celebrities, who have somehow found the secret to eternal youth. Seriously, these celebrity moms who did the 10 year challenge show that while a lot might have changed in their personal lives, they're handling it all with ease.

It's understandable why everyone is participating in the 10 year challenge — it's the best way to show off some serious personal progress (and show everyone else how much hotter you've gotten), according to Mashable. And it's not just your high school classmates or best friends that want to show off how they've changed — celebrities are participating, too.

Celebrity moms are the first to understand how much can change over the course of 10 years — they see that reflected in their children who go from being in diapers to being able to recite all of the United States presidents in order from inauguration date. Or, they get to see their children grow from high school students to real life working adults. But some things remain the same — like the way these celebrities look. Honestly, it seems like some of these moms are drinking from the fountain of youth (I'm looking at you, Reese Witherspoon).

No matter what their reverse aging secret may be, the following celebrity moms 10 year challenge pictures are such a fun thing to see.

In 2009, Witherspoon was only just a newly-divorced mom of two promoting the animated film, Monsters vs. Aliens, according to Elle. She started dating her now-husband, Jim Toth, a year later in 2010, according to Country Living, and would give birth to her third child (and second son), Tennessee Toth, in 2012.

Although so much has changed in her personal life, by looking at these two photos, which she shared on Instagram, it's impossible to tell that anything has changed at all.

Pregnant women have it hard and no one knows that more than singer and designer, Jessica Simpson, who is currently expecting her third child. On Instagram, Simpson shared a hilarious photo of her feet from 10 years ago compared to her feet now, which are very swollen from being pregnant, according to People.

While she might have had un-swollen feet 10 years ago, Simpson is likely so much happier now. In 2012, she gave birth to her first child, a daughter named Maxwell Drew, according to Rolling Stone. And a year later, in 2013, Simpson and husband, Eric Johnson, welcomed their son, Ace Knute.

If there was any mom who wins the award for best 10 year challenge post, Simpson definitely takes top honors.

Chrissy Teigen was 23 in 2009, and had just started dating her now-husband (and father of their two children), John Legend. And she was still tweeting, even back then, according to BuzzFeed — even if she only had 1,400 followers at the time (what a serious throwback).

Now, after giving birth to two young children, Teigen's looks have changed just a bit. But, as she pointed out on Twitter, Legend looks exactly the same.

The new mother took the 10-year challenge a step further by sharing a photo from 20 years ago. Although a lot has changed in the past 20 years (Union finally became a mother last year after years of trying), the one thing that remains unchanged is Union's beauty.

She looks the exact same way she did 20 years ago, with just a little bit better style.

In 2008, Lopez became a mom for the first time at the age of 38, giving birth to her children — twins, Max and Emme. Last year those twins turned 10 and have grown so much, according to People. Meanwhile, Lopez is no longer pregnant, is dating former baseball player Alex Rodriguez, and is really living her best life.

In 2009, Fisher was still engaged to her long-time partner and comedian, Sacha Baron Cohen. But she was already a mom — in 2007, Fisher gave birth to their first child, according to the Daily Mail. After having two more children in years after the fact, Fisher took the 10 year challenge to reminisce about her life 10 years ago.

"I was stretch mark/Spanx/diaper free a decade ago," Fisher wrote in the caption of the photo.

Now, all moms can relate to that.

10 years ago, Hudson was just the single mom to a five year old son, according to Harper's Bazaar. And now, a lot has changed. In 2011, Hudson gave birth to her second son with ex-boyfriend, Matt Belamy, according to Entertainment Tonight.

In 2008, Hudson gave birth to her third child (and first daughter) with boyfriend, Danny Fujikawa. Talk about a 10 year transformation.

Pinkett Smith was done having kids by 2009 — her son and daughter were born in the late '90's and early 2000's, respectively, according to People. But, that doesn't mean that Pinkett Smith's changes have been any less significant. You can sense that the mom of two has changed so much over time, which she has talked about on her new Facebook series, Red Table Talk.

"What a difference ten years can make!," Biel captioned her before and after photo on Instagram.

There are a lot of visible differences — her hair color and lip color has changed over time. But she also became a mom during this time, too. In 2015, Biel and husband, Justin Timberlake, welcomed their first child together — a son named Silas, according to E! News.

If anyone has had a huge transformation over the past 10 years, it's Anne Hathaway. In 2012, Hathaway got married to her long-time boyfriend (now husband), Adam Schulman. And a year later, in 2013, she won an Academy Award for Best Supporting Actress. Just when her life couldn't get any better, Hathaway became a mom and gave birth to her son, Jonathan, in 2016, according to People.

OK, so maybe Amy Schumer isn't a mom just yet — the hilarious actress and comedian is likely due some time in spring 2019. But, her 10 year challenge post on Instagram has to be one of the funniest yet. In the photo, posted to Instagram, Schumer shared a photo of actress Charlize Theron as serial-killer, Aileen Wuornos in the film, Monster. She juxtaposed this photo next to a picture of her pregnant and wearing, what can only be described as, "the best outfit ever." Whether this is a testament to how Schumer currently feels or just her being funny, it is an absolutely hilarious take on the 10 year challenge.

Although these moms might have welcomed their children into the world over the past 10 years, or seen them grow into adults, there are some things that never change. They're still as gorgeous as ever.