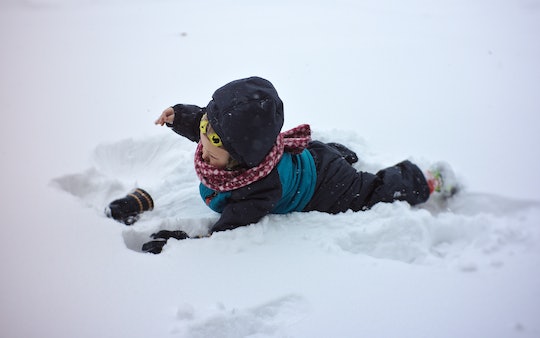 When you're a kid, the whole idea of freezing cold snow is super appealing and not at all stress inducing, as far as venturing out or actually driving in it goes. They've got this idea that tons of inches of snow on the ground equals hours of numb-toed fun. And if we're being totally honest here, they aren't totally wrong — there are a lot of fun things you can do when it snows. Sledding does have its perks and I can participate in a snowball fight with the best of them (or, you know, with the most mediocre of them). But nothing beats being all toasty and ensconced in your warm, dry home with a mug of spiked hot cocoa and some Netflix to keep you company. Although, try telling that to the tons of kids who are suddenly all about going outside once it's freezing outside when the summer saw them fighting for the right to reach hermit status in front of the TV.

There are few things as adorable as babies and toddlers trying to deal with the snow for the first time. Never mind the undeniable cold that comes along with snow's uncanny ability to seep past even the thickest gloves or mittens. And babies really don't seem to care that they are most definitely going to need to be bundled up to the point of A Christmas Story levels if they want to go outside and literally get lost in the fluffy white stuff. There is no shortage of babies trying (and yes, often failing) to deal with snow for the first time and we've got the best of the best to laugh at.

More Like This
Tips to Beat Jet Lag, For You & Your Kids
The Best Travel Tips For Solo Parenting
40 Valentine's Day Outfits Your Girls Will Adore Showing Off This Season
Covid Vaccine “Deserts” For Kids Under 5 Make It Almost Impossible For Parents To Find Shots
What Parents Are Talking About — Delivered Straight To Your Inbox