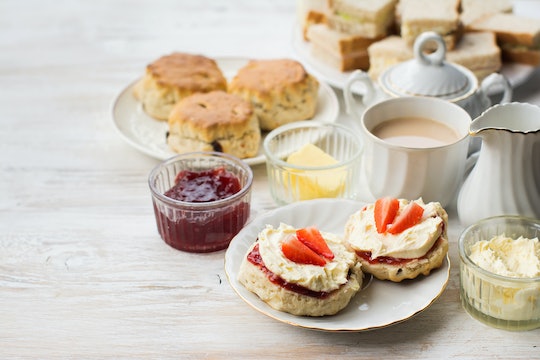 Hosting a royal wedding viewing party sounds like a blast, except there's one major issue that poses a potential problem for anyone who's not a morning person: The ceremony will broadcast at 7 a.m. Eastern Time. On a Saturday morning. Which, honestly, is just plain wrong. Sure, there's a time difference to contend with, but couldn't Buckingham Palace have taken all the royal family fans on this side of the pond into consideration? At any rate, this means you'll be feeding partygoers when you'd rather be in bed. So what are some easy royal wedding breakfast party foods that you'll actually want to make at the crack of dawn?

A full English breakfast could be one to go (fried eggs, sausage, bacon, beans, toast, mushrooms, and tomatoes) but those aren't very party-friendly foods. For one thing, they don't look particularly cute on a table that's all decked out with royal wedding themed decorations; for another, they're not the kind of thing that's easy to eat from a paper plate while you're standing up, chatting about crazy fancy hats.

Luckily, there are lots of easy recipes out there for foods that are both in keeping with the British theme and won't take up too much of your precious morning time (some can even be made ahead).