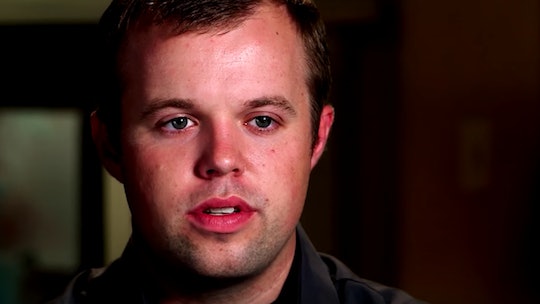 In the last 10 years that the Duggar family has been documenting and sharing their lives, fans have gotten to know the eldest siblings pretty well. Maybe it's because they got more screen time initially, or that a handful are starring on their own spinoff series, or that they're reaching that point in life where it's just one exciting milestone after the next. Whatever the case may be, it's clear the world cannot get enough of this mega-sized family. And when it comes to the second oldest Duggar brother who is actually getting married soon, these 10 fun facts about John-David Duggar might surprise even the biggest Counting On fan.

John-David is the third child of Jim Bob and Michelle Duggar, and his twin sister is Jana. According to Celebrity Insider, though he's known as one of the more "mysterious" siblings in that he doesn't share a ton about his personal life on the show (nor does he actively participate in Counting On, the Duggar kids' spinoff series), John-David actually has a lot going on.

Last month, in fact, John-David got engaged to Abbie Burnett, according to People. “Wow! We are engaged! This feels even more real than before! It was a special moment to share together,” Duggar and Burnett said in a joint statement on the family website. “The proposal and the ‘YES’ really solidified that we want to spend the rest of our lives together... Now we need to start thinking about a wedding!”

Alongside planning his upcoming nuptials, here are 10 facts you may or may not know about John-David.

On Aug. 17, In Touch Weekly reported that some super sleuth fans discovered John-David and Abbie's wedding registry, revealing that the pair had apparently listed their wedding date as Jan. 19, 2019. However, in a somewhat strange update to the Duggar family's Facebook page, the page admin posted the following:

Could it be a decoy date? Or is it the real date, and the Facebook post was meant to deter fans who may show up at the ceremony site on the 19th? The world will have to wait and see.

Some people may not realize that John-David is actually the third oldest Duggar sibling, as he was born a minute after Jana, his twin sister, according to TLC. The official Duggar family Instagram account posted this photo of them on Aug. 18, and wrote: "Our first set of twins. Love, love, love these two."

3. He Owns His Own Business

According to Famous Birthdays, John-David is actually the owner and operator of Duggar Towing. Though the business does not have a website, it's gotten five star reviews on its Facebook page.

"John-David has always loved to drive anything, from back-hoes and tow trucks to our forty-five-foot-long bus," Jim-Bob and Michelle Duggar, John-David's parents, wrote in A Love That Multiplies: An Up-Close Look At How They Make It Work. "He's mechanical and can fix about anything that breaks."

According to TLC, John-David also works as a firefighter, first responder and police officer in his hometown. TMZ reported in 2011 that the Duggar family also assisted rebuilding their community after a tornado.

John-David has his pilot's license, according to TLC, and In Touch Weekly reported that his dad, Jim Bob, actually bought him his own plane. It was reportedly a Cirrus SR22, which cost approximately $764,900, but it's reasonable to assume that the family found some kind of sale or discount.

6. He's Always Wanted To Settle Down

Despite being one of the oldest Duggar siblings, he and Jana are the last among the older kids to get married. However, that doesn't mean John-David hasn't been thinking about it for a while. In April 2016, he shared in a TLC video:

Future plans would be to, I think, one day, you know, the lord will bring the right one along, and I'll start a family and hopefully be able to invest in their lives and raise up a generation that will be great people for this society. ... I don't know ... I am praying about it ... one day. Just keep watching.

In Touch Weekly reported that the couple was seen shopping at a local Walmart together... unchaperoned. In 2014, TODAY reported that one of the family rules requires couples who are in courtship to always have someone with them whenever they are together.

8. He Got Engaged After Only One Month Of Dating

When you know... you know? According to Hollywood Life, John-David popped the question to Abbie Burnett after only a few weeks of courtship.

9. His Ideal Cupcake Is "Meat Lovers"

John-David told TLC that he was on a specific diet in which he won't eat dessert. Therefore, he decided his "ideal cupcake flavor" would be "meat." He continued: "Maybe like a beef jerky, or something like that. Bacon bits in the frosting."

10. He Always Puts His Family First

According to his TLC bio, despite all the different balls he has to juggle in life, his role as a big brother always comes first. (Awww!)

As John-David and Abbie take the next step in their relationship, only time will tell what other fun facts will arise.