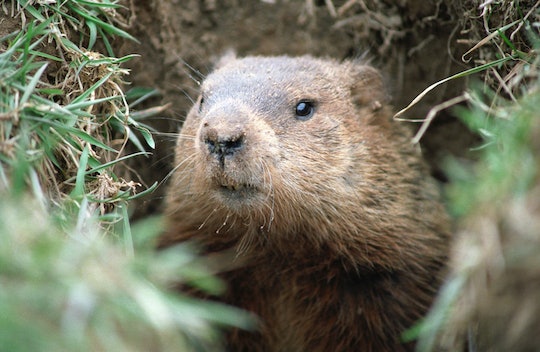 Groundhog Day 2020 is coming up soon — February 2 — and I know you want to be prepared with Groundhog Day Instagram captions, whether Phil sees his shadow and we're doomed to six more weeks of winter, or he doesn't see his shadow and spring is on its way.

Basically, if Feb. 2 is sunny and bright, then we will have winter for six more weeks. If it's a dreary winter day, then spring is coming soon. Seems opposite, but it makes sense based on a tradition that celebrates being halfway through winter (and surviving the winter) that started in Europe: Imbolc.

Imbolc, which is celebrated Feb. 1 and/or 2, is part of the "Wheel of the Year," and is the first pagan celebration after the longest night of the year, according to the Ancient History Encyclopedia Foundation — the Winter Solstice, which some refer to as "Yule." "Imbolc heralds the return of the sun, a time when the goddess returns to speed the way of spring... it is the time of the awakening of the earth, and the energies of the first stirrings of spring," explained Llewellyn's 2020 Sabbats Almanac.

Witch Bitch Amateur Hour podcast host Charlye Michelle explained in the "Imbolc" episode that the story of Brigid, goddess of fire (who is also known as Saint Brigid in Irish mythology), has a huge part in determining the changing season. If it's cold and dreary outside on Imbolc, she won't go out to collect firewood for her fire because she sleeps through the day — so it will remain cold a little longer. But if it's sunny and bright, she'll awaken and gather firewood, meaning that spring is on it's way because she "emerged." Sounds a little familiar, right?

Pagans and Europeans alike celebrated this time of year long before there was a groundhog named Punxsutawney Phil, and some believe that in addition to the mythology of Brigid, animals have been predicting weather trends for centuries. "According to the Old Farmer's Almanac, [you should] expect rain when dogs eat grass, cats purr and wash, sheep turn into the wind, oxen sniff the air, and swine are restless," the Sabbats Almanac explained.

As for Phil, he came along when settlers in Pennsylvania — who were from regions in and around Germany — would watch animal behavior to predict the changing seasons and weather. They would watch the hedgehogs near their homes to see what they would do on Imbolc, according to the Sabbats Almanac. And in 1887, the very first official Groundhog Day was observed in the United States, and this is when old Phil became involved as the official mascot.

So whether you celebrate Imbolc, Groundhog Day, or just are excited for some warm weather, flowers, and sunshine to come your way, these Groundhog Day Instagram quotes will be perfect no matter what you choose to celebrate.