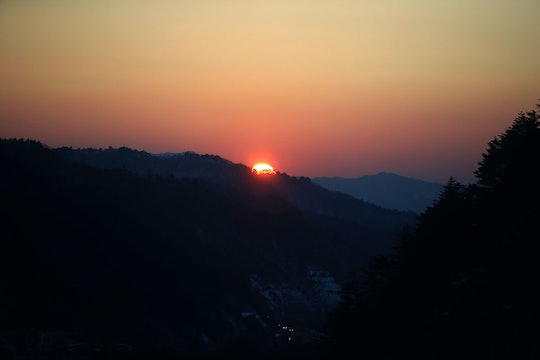 There are lots of sleep-starved people out there who really love when Daylight Saving Time ends each fall, but those people aren't parents. Scheduled this year for Sunday, Nov. 4, the theory is that DSL gives you an extra hour of sleep. However, it's really unlikely that parents will have the opportunity to seize that extra hour, because children hate sleep. Instead, parents will end up awake in the dark and more tired than usual. If you find yourself so sleep-deprived that conversations are out of the question and you have to rely on textual communication to inform people you're struggling, try one of these hilarious GIFS about Daylight Saving.

As WebMD explained, moving the clocks has the effect of disrupting something called a principle time cue — light, in this case — that manages our 24-hour circadian rhythm. Our internal clock becomes out of sync with the current hours of daylight and needs time to adjust, which would be easier if kids weren't hopping out of bed at 5:30 a.m. However, lots of states are trying to eliminate Daylight Saving Time and its accompanying fall back altogether, and Florida passed a law earlier this year to do so, as WSVN reported. It's too bad though, because the state's legislature can't put it into effect until Congress passes a federal law to allow it, which will probably never happen.

Dr. Greg Canapari, director of Yale University's Pediatric Sleep Center, agrees parents have it worse when it comes to the fall time change. On his website, he says falling back is worse for parents of small children simply because they wake up earlier than adults. Their bodies don't care what the clock says . Maybe you have the sense to respect the time and stay in bed until the hour you normally rise, but they don't. He goes on to say that kids tend to have disrupted sleep cycles during the transition period and it may be exacerbated with conditions like autism, so it's all super fun all around. One silver lining: Teenagers do pretty well with Daylight Saving Time ending because they already suffered more than anybody else when it went into effect the previous spring.

The University of Michigan's Health blog offers some pointers to ease the transition. First, try to anticipate how your child will react to the time change based on previous experiences, then block as much light from their bedroom windows as possible. Sunday might be easy since it falls on a weekend, but the fun starts on Monday when everyone has somewhere to be. The trick is to wear them out. Harness them to a cart like a dogsledding team and let them pull you around the lawn, or give them shovels and have them dig a moat around the house for "defense." Do whatever you can to make them tired enough to sleep a little longer so in a few days they're accustomed to rising with the clock. Dr. Canapari suggests moving bedtimes thirty minutes earlier a few days ahead of the time change and resuming their normal bedtime on Sunday. If they cooperate, they might find it easier to rise at their normal waking time.

If however, everything falls to pieces and there's no controlling it, you can at least give yourself the gift of laughter when you text these GIFs. It may be awhile before you laugh again.

More Like This
Banana Boat Sunscreen Has Recalled Products That Were Found To Contain Benzene
How To Avoid & Treat Lyme Disease
Everything Parents Need To Know About Monkeypox
How Hot Is Too Hot For Babies? Experts Weigh In