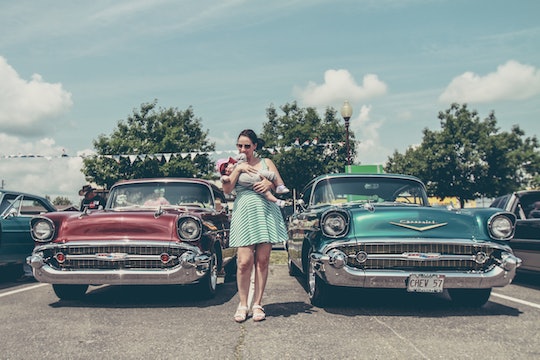 10 Moments When Being A Mom Makes You Doubt Your Feminism

From the outside, I could see how this trajectory may appear to be very traditional: woman gets married, woman has baby, woman stays home with a baby. I totally get it. There’s a reason why the old jump-rope rhyme follows that same order: It’s safe and common and is chock-full of implications about conventional gender roles. That said, I was often questioning my feminist beliefs when making many of those choices. In my case, even though I technically followed the same path, the reason it’s not as simple as it seems (or at least, why I tell myself that it’s not as simple as it seems) is that there were plenty of things happening in between those major milestones, like moving across country (twice), moving in with my partner, taking specific career steps by traveling, and pursuing passion projects on the side. In other words, I had options and opportunities, which made my choices feel less like "going down the obvious heteronormative path" and more like "choosing what I truly wanted, regardless of whether or not it would lead people to believe I was going down the obvious, heteronormative path."

And, while the definition of feminism often varies from person to person, my personal belief is that it comes down to opportunities and freedom. So, for this reason, it means I feel ever-so-slightly conflicted when, despite the choices available to me (and I’m lucky to have these choices; I fully recognize that), I still find myself in those so-called “traditional” roles at times. Here’s a sampling of the what kind of "feminist identity crisis" this can bring on: