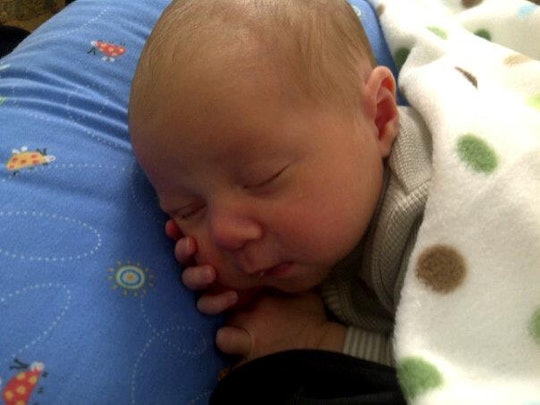 10 Promises I Made To My Rainbow Baby

The term "rainbow baby" isn't something I was aware of until recently. If you weren't aware, like me, a "rainbow baby" is a baby born after miscarriage, neonatal, stillbirth, or any infant loss. Achingly beautiful and bittersweet, the feelings I had while delivering a healthy baby after two losses were nothing short of complicated, especially in comparison to mothering my (then) 5-year-old daughter. There's a lot I wanted to say and things I promised my rainbow baby the moment he was born, because the chance to have him was more than I ever could've anticipated. Even with the mix of grief and fear beforehand, having him was nothing short of perfect.

Before this baby (who's now 5 years old), my husband and I tried for years to become pregnant with a sibling to our daughter only to experience miscarriage and infertility. Looking back on those times, they're mostly filled with pain, emptiness, and confusion as to why some women (me) have to endure so much, while others don't. Life and death are integral, so when two of my babies passed I didn't know if, or when, I'd get to experience bringing another new life into the world. I often blamed myself and my body for this perceived "betrayal," and though I had an amazing daughter full of life right in front of me, I couldn't let go of the desire for another baby. Maybe it was to fill the void from those that left me or maybe it was to know my body was more than capable, regardless of what it'd done in the past.

Eventually, I did become pregnant with my son. The day I took that pregnancy test, I had no real reason to. Menstruating and in no way hopeful, I'd made taking those tests part of my being. They overcame me at times because I knew, without a doubt, they'd be negative. Still, something forced me into the bathroom that day, and it was positive. Confused, joyous, and feeling everying in between, I couldn't reconcile the two facts: I'd lost before, but I was pregnant again. I cried all day in a crumbled-up ball on the couch. By this point, I feared moving at all would kill this baby, too, and I refused to take any chances.

The doctors labeled this pregnancy a "threatened abortion" during that first appointment. No one thought my body could nourish another baby through an entire pregnancy and, honestly, they were right. It was a difficult nine months, riddled with bed rest and pains I'd not experienced with my daughter, but none of the physical was worse than the overwhelming fear I'd lose this baby. It's a hard feeling to break away from when you've been through it before. I often found myself afraid to hope and afraid to dream for his future, because there'd just been too much loss beforehand. I was scared to love him or to become attached to the feeling of him inside of me. He became my reason for everything, from that first appointment on.

By the time I hit the end of my eighth month, an induction was necessary due to massive fluid loss, before my baby, and myself, were at risk for something going terribly wrong. Turns out, he needed that fluid for cushioning and once I delivered, it was discovered the umbilical cord was one movement from snapping in utero, something that happened upon his entrance into the world. But you know what? When it came down to it, the moment I saw him alive, none of it mattered. I loved him instantly. I attached instantly. I promised him a slew of things, instantly, because he was truly a miracle. He was my rainbow baby who'd made it. A survivor. Kind of like me.

Here are just a few of the many promises I made to my sweet boy the moment I saw him take that first breath Oct 11, 2011. On that day not only was my rainbow baby born, but my ability to hope for the future was restored.