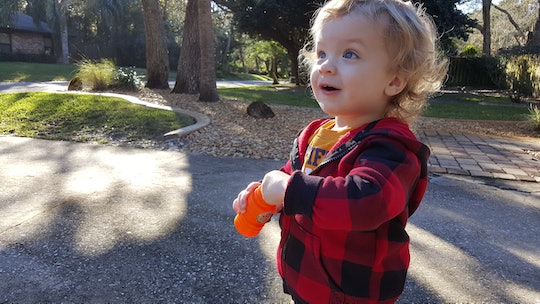 The One Major Screw-Up That Changed My Parenting Forever

If you’re like me, you spent a large chunk of your pregnancy daydreaming about all the exciting firsts you’d get to experience: hearing that first precious cry, seeing the first heart-melting smile, and getting to squish those cute chubby legs. I did not, however, imagine what the day would be like when I first let my child down. Sure, I was anxious just like every new mom is. I worried about doing everything just right and was terrified by my newborn’s fragility, but the one major mistake I made as a mom — the day I felt like I truly failed — changed the course of my own parenting forever, and it was the wake-up call I desperately needed (even though I didn't realize it at the time).

Before my son Max was born, I read every parenting book available and registered for organic, dye-free, and non-toxic everything. I was washed, laundered, folded, and ready. But nothing truly prepared me for the real thing. In the first month, my son spit up down the inside of my shirt in public and peed just about everywhere except his diaper. They were definitely not successes, but not quite catastrophes either. I just chalked it up to earning my stripes as a new mom. Motherhood was a learning curve and I was determined to learn from my mistakes.

But determination can be a tricky thing, and I thought I could do it all.

I realized the baby was screaming. Not crying. Screaming. How had I not heard it immediately?

Max was 2 months old and I was eight weeks-worth of exhausted when it happened. My husband was back commuting to work, something of which I was vaguely jealous of. So it was just me and my baby in what used to feel like a cramped apartment, only now it felt too large and too empty, with just the two of us. In an instant, I'd become a mother, thrust with responsibility for a tiny human. I left myself copious notes – when he peed and pooped, how often he napped, when he ate, how much he ate, and when he’d eat again.

I loathed to ask for help and never wanted to admit I needed it. In between the toll my chronic illnesses took and my overall post-pregnancy experience, I was a shell of my former self. But I kept telling myself I was "being strong" by doing it all. If I had a dollar for every time I said, “I’ve got it,” and, “I’m fine,” I’d be typing this on a much nicer laptop. My mind was in a constant fog, and as my daily duties grew, my stamina lessened.

How long had I been asleep? When had I last fed him? Where the hell were my notes?!

I awoke from the kind of short doze where you didn’t even realize you had fallen asleep. I was so disoriented that I had to rely on the light shining through the window to tell me if it was day or night. As I slowly regained my wits, I realized the baby was screaming. Not crying. Screaming. How had I not heard it immediately? My mind ran faster than my legs could. I scooped him up out of the bassinet expecting he would start to calm down now that I was there. But he didn’t. The cries grew louder and more intense. I asked him as if he could answer, “What’s the matter, baby? What’s wrong?” In an attempt to console him by talking, I just started going through the list out loud of things that could make a baby cry:

Are you wet, sweetie? No, you’re all dry. Are you still sleepy, darling? Did you have a bad dream? Are you cranky? Are you hungry?

Oh. God. It hit me like a ton of bricks: When was the last time he ate?

How long had I been asleep? When had I last fed him? Where the hell were my notes?! My hands were shaking as I made his bottle, holding him in one arm and the formula in the other. Tears streamed down both our faces. How did I let this happen?

I called my mother at work, bawling hysterically. Half incoherent sobbing, half Lorelai Gilmore speed rants, it was no wonder she couldn’t understand most of what I was saying. When I finally got it out, she reassured me that even if it had been a few hours since he ate, one missed feeding wouldn’t cause him to starve. Then she said the best four words anyone can say to a new, panicked parent: “I’m on my way.”

For me, failing wasn’t the missed feeding. Failing was letting my own well-being get so compromised that I was barely able to function.

By the time she got to the apartment, he was, of course, fast asleep, contentedly cooing. I, on the other hand, was still shaken up by the incident. I’m sure my mother must have said the same things a million times, but I kept asking, “Are you sure?” Though she spent most of her visit talking me down from the proverbial ledge of guilt and horror, she offered a firm reminder: I needed to ask for help.

She was right, and I was embarrassed I didn’t admit it sooner. I realized there was no shame in asking for help, even if doing so felt like I shouting to the world that I couldn't keep up with everything or that I couldn't hack it as a new mom. For me, failing wasn’t the missed feeding. Failing was letting my own well-being get so compromised that I was barely able to function. I didn't know the toll new motherhood would take on my own body, and I didn't realize that I'd lean and depend on my abilities as much as my son would. The day I failed was also the day I discovered my son’s health was (and still is) dependent on my own. If there’s nothing left in the reserves, then what can I possibly expect to give to him?

I may have momentarily felt like a failure as a parent, but it was the wake-up call I needed to be best mother for myself and for my son. Though asking for help hasn't turned into the overnight success I hoped it would, I know that I don't have to do pretend that I can carry it all on my shoulders, and more than anything, I know there's no shame in admitting the bumps along the way.