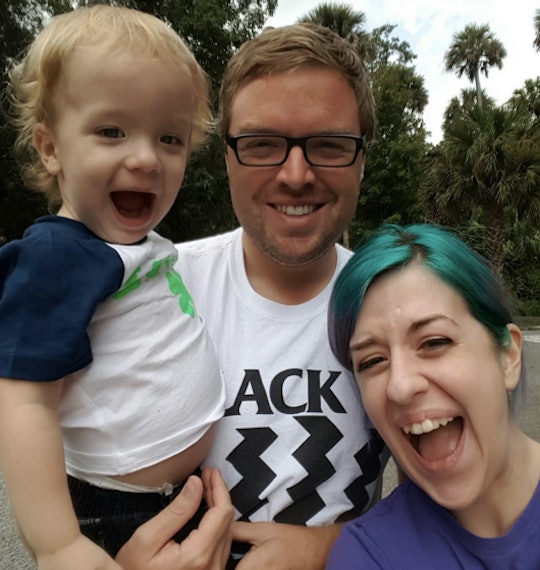 When I first heard that the film The Fault In Our Stars and the television show The Red Band Society would be about living with an illness, I was ecstatic. For so long I felt like health issues in television were relegated to “special episodes,” and characters who were ill were more like props, rarely important to the central storyline. It was (and is still) largely uncommon to see sickness in the spotlight, and to see people living with illness depicted on screen. It's even less likely to see a parent living with a chronic illness. Yet I know that reality all too well: I am mother to a charming, wonderful, happy toddler boy who runs and sprints and plays and plays and plays without rest, while I am living with multiple chronic illnesses.

I was disillusioned when I saw what TFIOS and The Red Band Society were really about and how they were received by my peers. TFIOS almost romanticized being sick and had my sister’s friends wishing for a tragic love story of their own. It felt like some type of twisted Shakespearean tragedy where Romeo and Juliet had cancer to blame instead of poison. The Red Band Society was hardly better in my eyes. It seemed more like The Breakfast Club or some other teen movie where the kids engage in hijinks, hook ups, and secret parties.

Having a chronic illness isn’t romantic or edgy. There isn’t always a happy ending or a lesson to be learned. Hospital stays aren’t summarized in half an hour and my journey doesn’t have a 120-minute runtime. Whether some days are good or bad, the truth remains: I am sick all the time. There are no cures for my conditions and even the treatments to alleviate symptoms aren’t guaranteed quick fixes. I may be smiling on the outside, but I am constantly fighting to maintain some sense of normalcy on the inside.

I have multiple chronic illnesses, but the two that impact me the most are my Lupus and Ehlers-Danlos Syndrome (EDS). Though chronic conditions are incurable, they’re manageable. Lupus is an autoimmune disorder, and while a healthy immune system recognizes foreign things like the flu or infections and fights them off, mine, however, can’t tell the difference between my healthy body and the things actually worth attacking. So I get sick, experience joint pain, fatigue, and mental fogginess all too often. EDS can cause similar symptoms since it’s a connective tissue disorder and because I also have Hyper-mobility/Type III. That means my skin is extra stretchy, I’m double-jointed, I bruise easily, and I experience additional joint pain and frequent dislocations.

The hardest part about having an invisible illness, something that doesn’t make you look sick on the outside, is feeling like you have to prove everything. I’ve lost groups of friends, job opportunities, and more because people start to think the constant bouts of sickness just sound like excuses. I wish I didn’t have to bail on plans, call out sick, or miss social events, but there is no rhyme, reason, or predictability to when, why, or how often I experience the debilitating effects of my chronic illnesses.

From the moment I wake up to the minute I go to sleep, my conditions factor into my plans. Before I can hop out of bed, I have to check to make sure no joints slipped out of place while I was asleep. (You only need to jump out of bed and step on a dislocated ankle once before you learn never to make that mistake again, trust me.) As I go through my day, I have to ration out my energy. Do I want to go to a yoga class with a friend in the morning or be well enough in the evening to give my son a bath? There is something on my to-do list that is sacrificed daily just so I can function. By the end of the day, my joints ache and I’m paying the price for the whatever I’ve done, no matter how “easy” of a task it seemed. I don’t ever want someone to think I’m lazy, but life with a chronic illness people can't see or readily understand makes it all the easier for people to assume I am.

As the years have gone on and my illnesses have gotten worse, I’ve lost jobs from taking sick days or not being able to perform at a hundred percent. I was even sick with the flu and a sinus infection on my wedding night because I let myself get too stressed during the weeks prior.

Now, because I have son, I don't always have the time to give my body the time it needs to rest or to recover. I am constantly pushing myself forward — not just because my son relies on me to, but because motherhood does as well. But I try to slow down and regroup when I can. I've learned not to force myself beyond my limitations like I did when I was younger, solely because I can’t let him pay the price for my overzealousness. Yet I can never shake the filling that I'm missing out on moments with him.I want to be the one running and playing with him, but sometimes I simply can’t. I hate the little voice inside my head that says I’m not a good parent if I can’t always participate. Seeing my husband run around with my son should make me happy, but it sometimes it makes me want to cry because I’m only able to film it not live it.

Often time my many illnesses keep me on the sidelines while my life and my family sprint full speed before me, and I'm still learning to be OK with it.

In spite of my illnesses, I’ve learned how to be patient, even when I don’t want to be. I’ve found a strength and resourcefulness I didn’t know I had by being able to get back up no matter how many times I've been knocked down. I’m eternally grateful for the little things, like taking a shower without hurting myself, being able to run, bending over without fear of dislocating something, wrapping my arms around my son. I’ve made friends online and IRL with people who don’t judge me when I’m down and don’t hesitate to help me back up when I need it.

Most importantly, I have my son, a loving partner, and despite all its many, many failings, a body that refuses to give up or back down.

More Like This
Ashley Graham On The “Fun, Organized Chaos” Of Raising Twins
These Stepmother's Day Instagram Captions Are Straight From The Heart
10 Ways ‘Workin' Moms’ Is Basically A Crash Course In Parenting
Brooke Shields On Why We All Need To Talk About Aging In A Totally Different Way