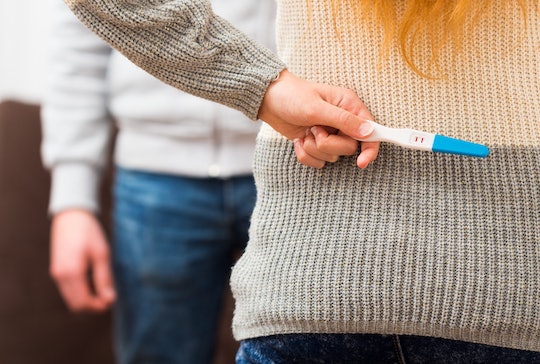 Finding out that you're pregnant can be exciting and scary, nerve-wracking and calming, all at the same time. Honestly, reactions to a positive pregnancy test are just as unique as the person who just found out their pregnant. The same can be said for the men involved in these pregnancies, and while it should go without saying that heteronormative relationships aren't the only relationships that experience pregnancies, a man's reactions to pregnancy news can range from terrified to elated to confused (honestly, just like anyone else's). However, the way grown-ass men react to a pregnancy announcements won't add to the potential fear or stress their now-pregnant partner is feeling.

Grown-ass men won't point fingers or place blame (if the pregnancy wasn't planned or necessarily wanted) when he finds out his partner is expecting; they won't ask their pregnant partner to make them feel better about a potentially life-changing situation because, well, they're not the ones that are going to be housing a human for 40+ weeks. No, a grown-ass man is going to realize that, while this news definitely affects him, it doesn't affect him as much as it does the person who just told him she's expecting. Sure, there are ways to tell if your significant other is a man child before you decide and/or end up procreating with him, but someone's true character doesn't always reveal itself right away. How a man reacts to a pregnancy announcement will, for better or worse, reveal a lot about who is he as a human being. Of course, we're all human and men have feelings, just like anyone else, but when you're a grown-ass man, you deal with those feelings and manage those feelings in a healthy way that doesn't hurt someone else, especially the potential mother of your child.

Starting a family (whether it was a planned or unplanned pregnancy) is a big deal, and grown men know that the moment they find out their partner (whether they're a long-term companion or a relatively new acquaintance) is expecting, that their life isn't the only life that will potentially change. They're going to realize that there are conversations to be had, decisions to be made, and they won't make those conversations or decisions any harder by pitching a fit or refusing to deal with the reality of their current situation.

If the father of your future child is a grown-ass man, he's not going to freak out or bail or make you feel guilty for sharing your pregnancy news with him. No, he's going to have a much, much different reaction.

More Like This
Yes, It’s Possible To Get Pregnant If You Have An IUD
7 Baby Name Generators To Try
The 4 Main Parenting Styles & Which Is Best For Kids
14 Free, Printable Birth Plan Templates For Every Kind Of Delivery