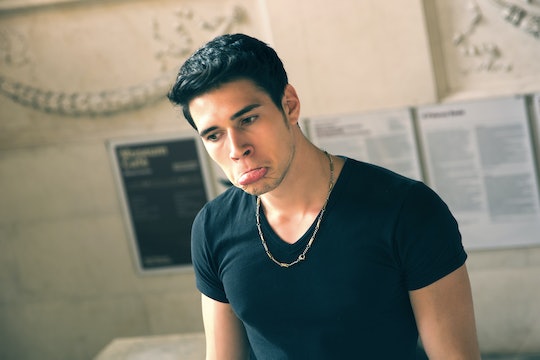 19 Ways To Tell If Your SO Is A Man-Child

Dating isn't always an easy road. So when you think you've finally found the one, whether it's your boyfriend or husband, you're psyched. Until you start noticing signs your SO is a man-child.

You assume that kind of behavior would rear its ugly head on the first date. But there's a huge difference between dating a man-child and dating a scrub. A man-child can actually be kind of endearing at first. They seem fun, boisterous, and act like they don't give a sh*t. You think they're giving the middle finger to societal norms because they march to the beat of their own drum. You assume that they're a free bird and that their immaturity is really them just having a good time.

And then you start to notice the characteristics of a man-child and think, “Dear god. I'm a man child's girlfriend.” A man child is exactly what they sound like — a grown ass man who acts like a child. They are demanding, selfish, and immature. They think the sun rises and sets on them, and they can't handle any responsibilities. They act like a giant toddler, but without the cute dimples or the luxury of being two years old. You think you can change him, and maybe you can, but it's not going to be easy. If your guy is showing any of these traits, he's got some serious growing up to do.