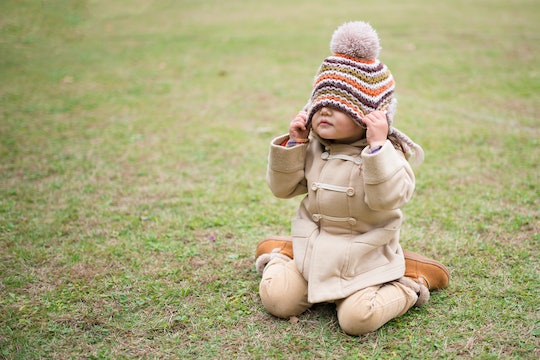 10 Signs My Toddler's Not Shy, You're Just Being Creepy

Imagine that some time in the last eighteen months to three years, you were whisked off to a new planet where most of the people who surround you are giants, upwards of five times your size. They speak a language you can increasingly understand, but struggle to fluently use yourself. Often, these giants get close to you without warning, trying to touch you or move you around. When you recoil, they say you're "shy." Yeah, freaking out when a strange "giant" tries to touch you is one of many signs that you're not shy, they're just being creepy.

If that hypothetical scenario would make you anxious, welcome to life as a toddler, particularly any time you go out in public. For most people, the definition of shy is, "being reserved or having or showing nervousness or timidity in the company of other people." For toddlers, the commonly accepted definition is apparently something closer to, "not totally accepting even the most brazen intrusions into their personal space," regardless of their actual disposition.

Now, most people out there are not trying to be creepy, and they're probably totally non-creepy in most of their daily interactions. Still, and for some reason, when faced with a cute, small person, people often forget the most basic of human interaction. This happens to my toddler multiple times a day, and when he shoots the person a withering side-eye (he get it from his mama) or flinches, they always respond with a steadfast, "Oh! I guess he's shy."

This really bugs me, not only because I hate to see my child feel uncomfortable, but because my partner and I are working really hard to teach him about consent and respecting others' boundaries, and it doesn't help at all when people repeatedly don't do the same and respect his. We can't expect our kids — especially our sons — to magically learn to recognize and respect verbal and nonverbal expressions of "No" when they start dating, if the whole world has taught them (essentially since birth) that people with smaller bodies have to just accept whatever people with bigger bodies want to do to them.

For the record, my son isn't shy in the slightest, though there's nothing wrong with being shy. Everyone's entitled to their comfort level, but my kiddo loves socializing and meeting new people. He loves to run up to the front of a room and help whomever looks like they're in charge, and he gets especially excited if we're some place with a podium or a microphone that he can use to "address" the crowd with random words, babbles, and coos. He'll even spontaneously go on little walks around a restaurant to shake hands with people he has decided to be friendly. Basically, he's going to be your president someday, so get on his good side now.

The following signs apply to my toddler, and most of the small children you encounter on a daily basis. You probably mean well, and I'm so glad you're trying to be friendly. However, if you're doing any of the following, your excitement to see a cute little person has overwhelmed your social sense a bit, and you're now careening toward "creepy" status. It's not too late, however; just back up and give the little person a chance to calm down and see that you mean well.