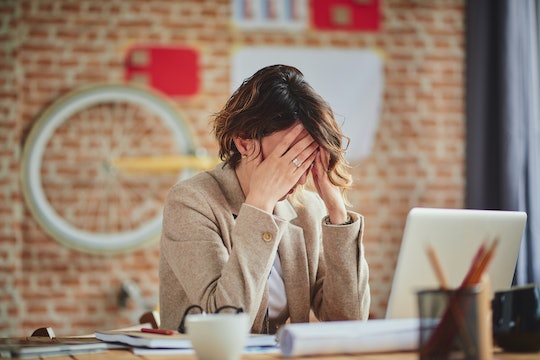 10 Struggles Only Moms With OCD Can Understand

When I was around six or seven, I used to do this thing with my toes in the car. I'd scrunch them up and release with every object we passed; a lamp post, shadow, or even a line in the sidewalk. If we had a particularly long drive, my muscles would cramp. I took years for me to realize that this seemingly simple act would come to be the basis of my adult identity. While it's just one of the many struggles moms with Obsessive Compulsive Disorder (OCD) can understand, because of the rest of the world and it's negative perception of mental illnesses, it's something I've often felt a lot of shame and guilt over.

The Mayo Clinic describes OCD as having, "a pattern of unreasonable thoughts and fears (obsessions) that lead you to do repetitive behaviors (compulsions)." The description goes on to say it can "interfere with daily activities and cause significant distress." I can attest to both. Through my teen years, I hadn't accumulated any specific compulsion like I had when I was younger. It wasn't until my adult years — years I spent sorting through and learning to deal with moments of significant trauma — that my obsessions and compulsions re-entered my life. It was a slow-moving storm where patterns in my routine changed over time. I'd pick up a new habit, such as rubbing my knuckles together or counting the seconds that passed between sentences, one at a time, so it felt very normal as I eased into each day.

When I finally rounded up the courage to attend therapy, I found peace in the diagnosis. All those years I felt like such an outcast for making an unknowing spectacle of myself fighting indecision in the grocery store's cereal aisle for an hour, or nervously laughing my way through a holiday party to avoid talking about my need to wipe the counters a certain number of times, were validated. With a diagnosis, it meant I could figure out how to manage the OCD. It didn't have to rule my life like it had in the past, and sometimes, still does.

It's been two years since I restarted therapy; two years since I found answers about why I do the things I do, especially in the way it affects my parenting. On that note, here are some of the struggles only moms with OCD can understand. (Don't worry. I promise I will end this on an even number.)