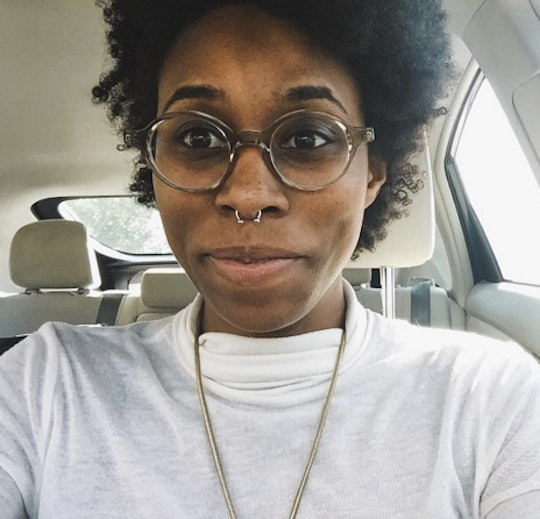 Perhaps the biggest "blessing" that has come from parenting after surviving my sexual assault is that, as a mother, it's made me extremely vigilant about how I talk to my children about their bodies and about sex. I am a firm believer that it's never too early to begin the conversation around the importance of consent and ownership of one's body, and it's something I take incredibly important as a parent. Talking about sex and consent were conversations I didn’t grow up having, and I didn’t have the language to articulate my assault to anyone after it happened. All I felt after the first assault was overwhelming shame, because that's what I had been taught to internalize from everything I saw in the media and in the world around me. Now I have my own children and like any other parent, I hope and pray they will never have to live through the experience of physical abuse, but I also hope that if they ever do, I'll have provided them the right kind of tools and language for them to feel confident in stepping forward and standing up against rape culture.

I was 18 when I was first raped. It came months after I'd had sex for the first time with my first boyfriend. Despite the fact that I didn't have a frame of reference for sex, I thought I was so lucky because my partner at the time was so good and so loving, and made sure I felt comfortable. I grew up in a very conservative household and I was raised to believe that sex should be saved and reserved for “true love.” Having sex with my boyfriend opened me up to a whole world my parents never bothered to show me. After that first time, I realized sex could be beautiful and good outside of marriage. But then I was raped. And confused. I blamed myself even though I knew what happened to me wasn’t my fault, and I couldn’t bring myself to have a conversation with my parents about it. For months and months I was cloaked in shame and despair. My perspective on my body shifted, and I began to despise the way I looked. I only hated myself more.

Learning that my first child was a girl filled me equally with joy and fear. What could I impart on her to better prepare her for whatever might come her way? What would I do if what I went through happened to her? Sitting down and thinking about the fact that someday, someone could harm my child in a sexually abusive way was infuriating. It left me with a sense of helplessness, but I knew immediately that I wanted to do everything I could to combat that feeling. I knew, even then, that I wouldn't be able to protect my daughter from everyone and everything. I knew I wouldn't always be able to fix the hurt someone else will eventually cause her, but I knew I wanted to teach her what I once so desperately needed. I wanted to give her everything I didn't have when I was suffering.

The first time I was raped, I was actually on a date with someone I didn't know very well, and to this day I can't actually remember his name. But I think my brain did that on purpose — it forgot certain things to help me cope. I questioned whether or not it was rape after it happened because I'd only ever heard of strangers raping people. I didn't know people you went on dates with, and certainly not people close to you, could rape you. I remember being terrified when it happened. I wanted it to end, but I didn't have the words to say "no" or "stop."

I remember disconnecting myself from what was happening to my body. I was watching what was happening, but I was not there. I could feel everything, but I felt nothing. I didn't know the importance of consent, or the fact that I had a choice. Now as a mother, I want my daughter and my son to know they always have a choice when it comes to sex.

I even allow my children to say “no” to me when I ask for hugs or kisses. I used to make sad faces and whine to them about it so they’d give in, but I realized that that kind of behavior isn’t one I want to encourage. If they don't want to give me something I’m asking for, they're entitled to that. And in turn, I respect and validate their choices.

I don’t limit the conversations around bodies and sex to just my daughter. I share these conversations with my son too. Both of kids are still young — 6 and 7, respectively — so we don’t actually talk about what rape is, but we talk about why we don't touch others without asking, and without a clear "yes." We talk a lot about how "no" actually means "no." Sometimes I hover as they play with other children, because I'm trying to make sure they’re asking the right questions when it comes to hugging, or even sharing a toy. I correct their language constantly, pointing out why we have to respect our friends, even the ones we don’t like that much. At times I worry that I’m being overbearing, but when I witness them interact with others, I realize that if I continue to encourage this behavior, it'll eventually become ingrained. It'll be who they are. I want them to be humans who understand the importance of respecting themselves and also the people around them.

I’ve been raped and molested more than once. The trauma it’s left me with is overwhelming, and will take me a lifetime to work through. But I want better for my children.

I even allow my children to say “no” to me when I ask for hugs or kisses. I used to make sad faces and whine to them about it so they’d give in, but I realized that that kind of behavior isn’t one I want to encourage. If they don't want to give me something I’m asking for, they're entitled to that. And in turn, I respect and validate their choices. It seems simple, but I think it feeds into something much larger. When young teenage girls come forward with allegations of molestation, rape, and assault, they are sometimes run out of their towns, or shamed. The blame is often placed on women and girls to be better, to dress differently, to not drink at all, to never walk alone. It's not often that we place this responsibility on our sons, partners, or husbands. Because of that, I won't ever demand my daughter hug anyone, and the same goes for my son. I won't support a cycle where females are encouraged to be submissive. My children will believe in the power their words carry, especially when it comes to the word "no." And they'll do all that because they've been raised that way.

I’ve been raped and molested more than once. The trauma it’s left me with is overwhelming, and will take me a lifetime to work through. But I want better for my children. I want better for their peers. I want better for their futures. As a parent, I see it as an important part of raising them in America in 2016. In a perfect world, my children would stay sweet and innocent and naive forever, but I know better than to think believe my babies will stay that for long. I know how fast they change and move into new stages. For me, it's important that as they grow, they're armed with the dialogue and basic understanding surrounding consent, around respect, around their own bodies. They'll have much more than I did, and to me, that makes all the difference.