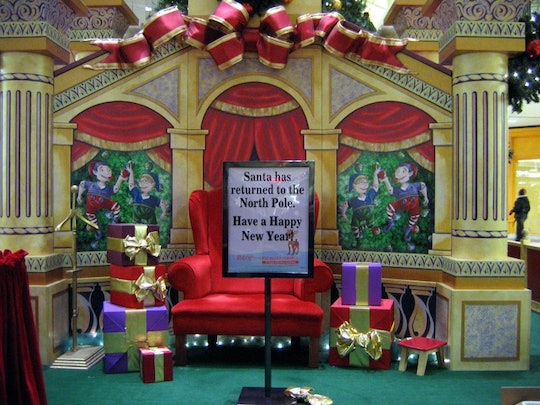 I see it every year, and every year, I cringe. Photos of crying, scared-looking children made to sit on Santa's lap at the requests of parents, grandparents, and caregivers. Children reaching for their parents but held in place by a stranger. I bite my tongue, because I'm not about to criticize another parent publicly (and I never would). I just know that I won't ever force my kids to sit on Santa's lap. Instead, I put myself in their shoes. My partner and I have always practiced attachment parenting. At its most basic, this means we want our kids to trust us and to know we are always there for them. In our opinion, handing them off to an adult they don't trust and are afraid of is betraying the trust they've put in us to always keep them safe, and that doesn't even touch the important lessons we teach our children about consent.

My partner and I have gone to great lengths to teach our son and our daughter that they do not need to do anything they aren't comfortable with, particularly in regards to physical interactions with other people. I have memories of being tickled by well-meaning relatives and hating it, but not saying "stop" because I didn't want to hurt anyone's feelings. Now I make sure if anyone is playing or roughhousing with my kids, they check in first and ask if my child is having fun and if it's OK to keep going. A lot of times my kids tell them to stop. They are confident enough to say no. And I'm not going to abandon that rule just because it's Christmas and we've waited in line for an hour and I'm cranky or because I think it's cute. I won't ever force my kids to sit on Santa's lap, but that's my prerogative. For parents that do, I'd never shame or insult them or make them feel less than for their choices. Parenting is all about choices, and not asking my kids to sit on Santa's lap is mine.

If my kids want to visit with Santa, however, it's a totally different thing. Last year we got all spiffed up and went to the mall and waited in line. My son, who was 4, was so excited to meet him. He gladly hugged Santa and talked to him. There was no pressure from us to give us a good picture. I just wanted to give him the opportunity to meet Santa. His trust in me is more meaningful than any picture, and that memory will stay with me far longer than any frozen in a frame.

As much as possible, I let my kids make their own decisions about what they want to do. I try to support them while allowing them as much independence as they want and as is safe. (I mean, if he asked me if he could use a machete, I'd say no. But if he doesn't want to do something that's optional, he doesn't have to.) It's all still part of teaching consent and practicing attachment parenting. He has autonomy, but he also has my support.

My daughter, who was 1-and-half at the time, wanted no part of sitting with Santa. And that was fine. Sure, we were the only people in line who waited and then didn't get the photo with all the kids. My dad was with me and he happily took her to another spot while I got to watch my son revel in his interactions with Santa. When my son was done, we went to another spot in the mall that was decorated and took pictures together with my daughter there. We all had a really nice time, and we got a couple really nice pictures.

Like I said, parenting is all about choices. The ones I made that day, and the ones we've made every Christmas since, serve to show our kids that we respect them, trust them, and we have their best interests in mind. It isn't to belittle or to side-eye or to shame any parent who may think and feel differently. That's not what we're about. That's not what I'm about. As a mom and a woman, I want my son and my daughter to know it's safe to say no, whether it's to a sit on Santa's lap or my own.