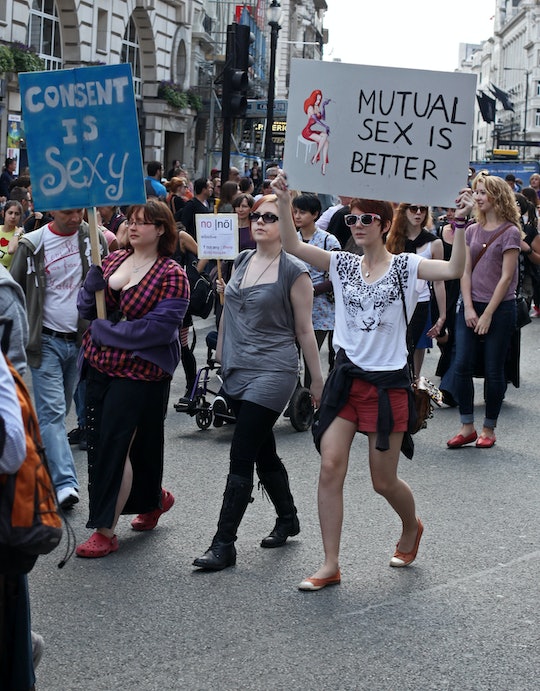 There's an endless list of vital lessons you'll inevitably teach your son. At some point, you'll end up covering everything from how to successfully pee in a toilet to how to say his first word; to abstract, complex concepts like the meaning of life and what happens after death. Even the lessons you didn't know or couldn't have possibly imagined you'd end up teaching your kid end up being extremely significant and pivotal in helping shape your son into the individual he will become. However, the most important thing you'll ever teach your son is consent.

The ability for everyone to have complete body ownership — to make their own decisions about and control their own bodies without question or opposition — is freedom. It's a right that everyone not only deserves, but is unequivocally endowed with. Your son, through no fault of his own, might have an easier time accessing that right. Thanks to a misogynistic, patriarchal, racist, ableist society that places the most power in the hands of straight, white, able-bodied cisgender men, your son — if he is any or all of those things — won't have to battle for the ability to make his own medical decisions or reproductive decisions or sexual decisions, the way women do.

Of course, that's not to say your son will never face hardships or have to fight for his right to do this or say that or be seen as a valid human being; He will, however, have to do so less frequently, and in different ways than the women he shares this earth with.

Which is why learning consent is vital for your son, and for everyone else. As parents, we want our children to inherit a world that is safer, kinder, and all-around better than the one we currently live in. That cannot happen if we continue to tell women that they can't control their bodies, or that they owe men the right to their bodies when men see fit, that there are "grey" areas when it comes to sexual conduct, or that their sexuality isn't inherently theres, but instead, everyone else's.

He's learning that his needs and wants don't mandate what other people are obligated to offer him. In fact, he's learning that when it comes to people's bodies, time, energy, and resources, he's now "owed" or entitled to anything.

And all of those lessons, combined and applied in other areas of his life, will help restructure an oppressive culture into one that is inclusive, accepting, and equal. Those lessons will shape your son into a man who will aid in the fight for the rights of all people.

By teaching your son about consent, you're raising someone who can change the world for the better, and help undo a long-standing, pervasive social mindset that imbues men with a inherent sense of sexual entitlement. It's a pretty big deal.