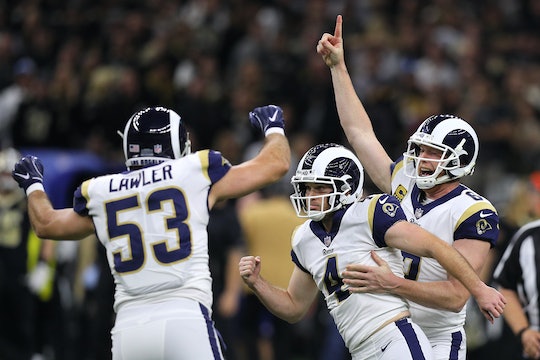 Super Bowl weekend is practically here, and if you aren't practicing your favorite Maroon 5 dance moves for the halftime show, then maybe you're prepping your party menu or making sure your lucky Rams jersey is clean. (You don't have to wear a lucky Patriots jersey because apparently Tom Brady already has that covered.) But no matter where you are in your big game preparations, you'll need some Super Bowl 2019 Instagram captions to keep your timeline as superb as Jared Goff's arm. (Or as intense as Bill Belichick's RBF.)

Look, it's just the Super Bowl. I mean, as an Atlanta sports fan, I'm just trying to make it through until the wounds of 2017 are officially healed (and that means rooting for the Rams, because ugh the Patriots), so it's not like I'm hoping to gain a bunch of social media influencer points on this night. And neither should you. But if you want to perfectly caption your Super Bowl party spread or your celebration dance boomerang when Tom Brady gets sacked and doesn't get the flag he was hoping for, then these 10 Instagram captions should have something for you. Bonus points if you use a hashtag — we all want to see your best "Moves Like Jagger" boogie.