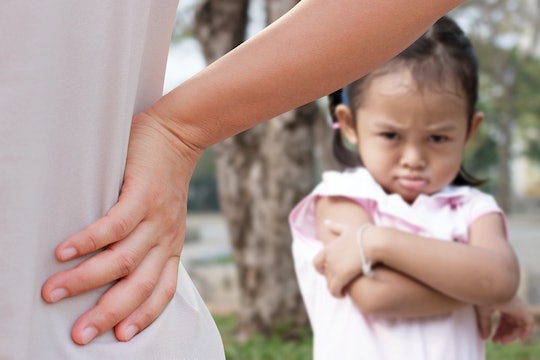 10 Truths About Talking To Your Kid Like An Adult

People often tell me my kids sound like little adults. Not only do they have huge vocabularies, they're assertive, independent, and fairly confident. Before you think I'm bragging, please know that it's not always fun. The trouble with having kids who know a lot, is that they can be "know-it-alls," never hesitating to tell you you're wrong. You, too, can have kids who tell you off on a daily basis. The secret? I've always been the kind of mom who talks to her kid like an adult, mostly because I didn't know any better.

All joking aside, I have learned that when you offer kids respect, they learn to trust you and what you say. That's a huge deal for me. My kids deserve to be treated like human beings and, in return, I have found that it's easier to interact with kids who understand the "why" behind my decisions, not just "because I said so."

As a bonus, it's easier to talk to my kids like they are adults. I don't have to lie, make stuff up, come up with bizarre answers, or insult their intelligence. If I don't know the answer, I say, "I don't know, but I will find out." If I don't think they are emotionally or intellectually ready for a topic, I provide information that's truthful, but age-appropriate, because, they can learn about things like politics, sex, and war as they grow. It doesn't have to be all at once. If I mess up (and I do, a lot), I apologize.

TBH, I often respond to subjective questions with, "What do you think?" not just because I don't want to answer their question about whether God, Santa, or the Tooth Fairy is real, but because I want to encourage critical thinking. If I've learned one thing in my almost eight years of parenting, it's that taking the path of least resistance isn't necessary lazy, it's smart. And for me, talking to my kids like adults is way easier than coddling them, being condescending, or expecting them to obey because "I said so."