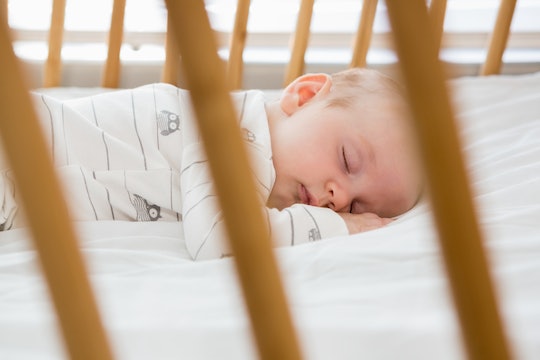 What I Wasn't Prepared For When My Baby Slept

Soon after my son's second birthday, I awoke in a panic around 3:40 in the morning. I glanced around, didn't see my son, then woke up my husband while frantically reaching for the baby monitor. "Is he OK? Where is he? Why hasn't he cried? Is he breathing?!" My groggy husband tried to reassure me he was OK, but I wasn't convinced. It took me another two hours to fall back asleep, mostly because I'm a poor sleeper, but also because one of the things I wasn't prepared for when my baby slept through the night was believing that he was just sleeping (and not something way scarier).

Though I originally planned for him to be in a co-sleeping attachment for his first few months before moving into a crib in his own room, my baby had other ideas. He patently refused to sleep on anything without a heartbeat for his first few weeks, and then needed to be within latching distance of my breasts (or in a moving car or stroller) until around 10 months. Even then, he only went about two hours at a time in his crib before needing to eat and be held. And while we maybe, probably could have trained him otherwise, I have a very low threshold for crying and my son is remarkably strong-willed. I have more than enough battles to pick with him during the day, so when our nights could be relatively simple by meeting one fairly reasonable (from an evolutionary perspective) request, that was hard to decline. So into our bed he came for the rest of the night to latch and cuddle freely. Though it got a little less convenient as he grew, we held out hope that, eventually, he'd just stay in his own bed all night. Eventually.

So naturally, when he actually did sleep through the night, I freaked out. Because who doesn't freak out when their life goes right? "Too good to be true" seemed applicable to a situation like this, until I remembered that waking up to eat all night was only ever supposed to be a temporary phase of life. So while I'm super glad I get to say "I told you so!" to all the people who swore he'd never leave our bed if we didn't sleep train him at 3weeks or whatever, I also wasn't prepared for the following things when my baby actually did sleep through the night.