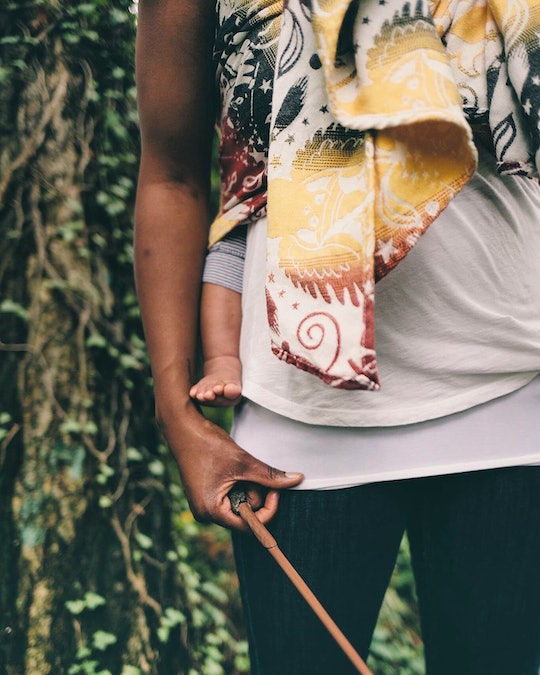 What The Man Who Touched My Stomach Needs To Know

It's really cold where I live right now. It feels like it's about one degree outside. My toddler's love of running around outside and staring at the trains that pass by our house knows no season, though, so I bundle us both up in basically all the winter wear we own go for walks. That's how I came to be stuffed fairly tightly in my winter coat, having my stomach rubbed by a total stranger who mistakenly believed I was pregnant. There are so many things I wish I'd said to the man who touched me, but I was so shocked — and caught up trying to make sure my son didn't dart onto the train tracks — that I rattled off a smart-ass comment ("Nope, not pregnant! It's just a coat and whatever's left over from the last baby.") and tried to nudge my reluctant toddler into walking in the opposite direction.

As someone who has to do deep breathing exercises just to call another person on the phone, the idea of actually putting my hands on someone I just met mere seconds earlier, cheerfully asking them if they've "got another on the way?" makes my entire body cringe. Like, what? A stomach is one of the few parts of our bodies that doesn't have a crap ton of bones and other biological "armor" protecting it. It's so vulnerable. I don't understand why people rub visibly pregnant women's bellies either, but unless you're from some weird-ass cat planet where universal tummy rubs are the customary greeting, I definitely don't understand why you would rub someone else's stomach when you're not even sure if they are pregnant. That's just weird on top of rude.

But maybe that dude really was a friendly cat trapped in what I erroneously thought was a grown-ass man's body. Maybe I should give him a break and be grateful that he didn't scent mark my legs or flip his tail up in my face. However, if that dude is indeed a fully-formed, human adult, I have a lot of things I'd like to say to him if I ever get the chance, including but certainly not limited to the following: