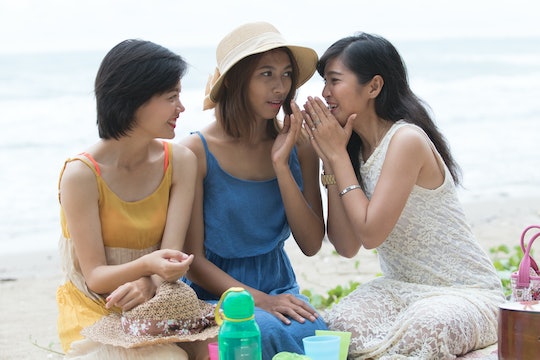 10 Things Moms Can Only Say To Other Moms

When I had my first baby, we were new to the neighborhood. Luckily, it had a local list-serve — mostly people trying to unload Ikea bookcases or seeking recommendations for podiatrists — but through it I found a Google group for families with kids born around the same time as our baby. Since none of my friends with kids lived in other states, this mom squad was a lifeline, mostly because I was able to say things moms can only say to other moms. I mean, you wouldn't think it, but motherhood get lonely and, well, I needed a group of women who understood the way only other mothers can.

While I visited every possible website to read up on what to expect from my then newborn, I couldn’t help but feel like a stranger in a new life I had just started. In this local baby group I could relate to all the moms, share my experiences and seek advice from parents whose babies were growing up in the same world as mine. We gathered for playdates — more for the moms than for the infants — and met in the playground, hungry for adult interaction while we pushed our toddlers in sync on the swings. It didn't take me long to realize that, as my daughter grew and was later joined by a brother, I had so much more to say to my mom friends than anyone else. I still cherished my childless friends and I missed them a lot, to be sure, but my parenting routines organically brought me in more contact with other moms, and less with the friends who weren’t building their days around kids’ nap schedules.

As much as I loved talking about things other than my kids (I was, after all, a fully formed person with interests and ambitions that fell outside the parenting spectrum), I loved the ease with which I could just fall into conversation with another mom. After all, there are some things you can only say to another mom, including the following: