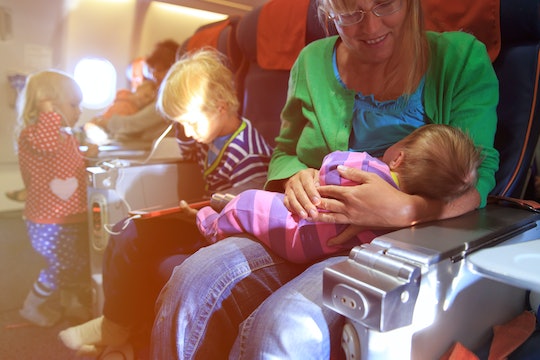 10 Inevitabilities Of Taking Your Kid On A Plane

My daughter boarded her first airplane when she was 11 weeks old, and before she was 15 months old she had been on 20 flights. I have two pieces of advice when it comes to traveling with kids. First, do it. Travel with your kids even though it's exhausting. Second, know that Murphy's law of traveling with kids means there are some disastrous and hilarious things that are bound to happen when you take your kid on an airplane for the first time. It's just the law of the land. If you're lucky, every disaster won't happen on every flight, but know that eventually you will land at your destination and you can try your best to forget about the trauma before you book another flight.

When my daughter was 8 months old, we took her and our 6-month-old foster daughter on two flights. First from Houston to Cincinnati, then from Cincinnati to Denver. Then we each flew separately with one baby after that. As luck would have it, the worst travel experience we had was when we had extra family members around to give us a hand. That's just the way air travel with babies and kids goes, I guess. You can be as prepared as can be, and still have everything fall apart. The good news is that air travel with kids is sort of like giving birth, or so I've heard. You forget just how miserable it is by the time you have to (or want to) do it all over again.

One of my friends, who has traveled with her four kids across oceans for years, told me the best reminder she gives new parents traveling with their kids is to remind yourself that it will eventually end. It can't go on forever. At some point, you'll get a shower and a non-airplane-food meal and all will be right with the world.