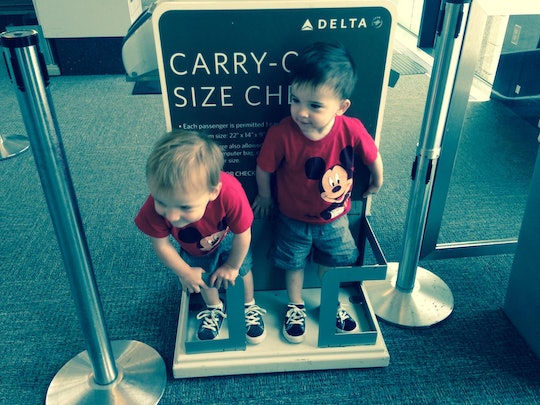 Why I Refuse To Apologize For Flying With My Small Children

My partner and I have always loved to travel together, and when we became parents it seemed only natural that our twins join us on our adventures. In fact, they've been flying since they were 7 months old. I know lots of people cringe when they see a baby or toddler headed down the plane aisle towards them, and with good reason. A screaming baby can certainly make a flight unpleasant, and my kids have had their share of tears at 35,000 feet, but I'm not going to stop taking them on plane rides because of these difficult moments, and I certainly refuse to apologize to passengers for my small children acting their age.

With over two dozen flights under each of their belts and six more planned in the next year, their frequent flyer points balance is pretty impressive considering they're two people still in diapers. No amount of complaints or side-eye will keep us from racking up the miles — or keep our sons from traveling with us.

When there's a screaming baby on a your plane, it's annoying. Before I became a mom, I'd strain in my seat along with everyone else to try and see why the baby was crying. I'd wonder how long I'd be subjected to the noise. Now that I'm a mom and it's my baby crying on the plane, I still desperately want the noise to stop, but my concern for my child matters more to me than my own feelings or anyone else's.

What I wish unsympathetic passengers would realize is that when one of my kids is crying on a flight, I'm just as upset as they are. As a mom with a crying baby, it's hard to be on a plane with limited resources and options to try and console them. It's hard to know if they're crying because their ears are bothered by the change in cabin pressure and I should have done a better job of giving them a pacifier or bottle to drink from, or if they're just angry over being forced to wear a seat belt.

As upset or frustrated as I get when one of my babies is crying on a plane, I refuse to get embarrassed by it. I'm doing everything I can think of to try and remedy the situation, and if other people can't recognize that, it's not my problem. I won't be offering my apologizes to surrounding passengers, because my concern is for my child and helping them calm down, not making a stranger feel better about their in-flight movie being disrupted.

Just because I don't think I should feel badly for taking my small kids on a plane doesn't mean I don't try to be considerate to my fellow passengers. I do my best to anticipate my kids' needs on board and take whatever measures I can to try and ensure a good flight.

We select flight times based on the kids' nap and eating schedules so we're not taking exhausted and starving toddlers on a plane. We select our seats to be close to the exit for easy on/off access, and we buy out the row when possible so if the kids get the wiggles, they're not disturbing others by playing with cars on the armrests.

I pack plenty of snacks and drinks so we're not relying on the busy flight attendants for drink service. I bring plastic bags for dirty diapers and add the tied off stink-bombs to the main garbage bag that the flight attendants maintain, so I'm not making the tiny restroom smell even worse. I trek to the bathroom every time someone needs to be changed and would never, ever change my child on a seat.

We like to get the airport early and find an empty gate with lots of open seats to allow the kids to stretch their legs before putting them on the plane in hopes that it helps them feel less cooped up once on-board. My kids recently developed the attention span necessary  to watch cartoons, so for our most recent flight I bought them child-sized headphones so no one else would be subjected to the sounds of Daniel Tiger's Neighborhood.

I've seen stories in the news of parents who offer free trinkets to their fellow passengers as a way of apologizing for taking a baby on their flight. I love paper crafts as much as the next Pinterest fan, but I draw the line at shelling out money to make consolation prize packs for strangers when I've already paid a hefty price for plane tickets.

There's lots of thought and planning that goes into taking my kids on a flight, so if in spite of my best efforts we have some tears to deal with, I don't think I owe anyone an apology or a pair of earplugs and some free candy for trying my best and coming up short.

I've gotten my share of side-eye from grumpy passengers when one of my kids is crying, and I have no problem ignoring them, but on the whole, people seem to be understanding when a baby is having a bad flight. On our most recent trip last month, I was sat with one toddler while my husband was across the aisle with our other toddler. The three-hour flight was wonderful and the kids were happy and quiet — until the descent. Out of the blue, the child who was sitting with my husband decided he had to sit with me immediately. I tried to explain to him that he had to stayed buckled in next to his dad because we were landing, but he was inconsolable.

We tried bribing him with toys and treats, distracting him with the window and promises of fun once we landed, but nothing was working. I sang, his dad danced, we did everything we could do while being buckled in, but he cried without stopping until we finally landed. His cries were so loud that the pilot could hear him from the cockpit. Rather than blame us for our inability to calm him down, the captain made a joke over the PA system about my son being upset over the recent World Series results.

I felt awful that my child was so unhappy and that he was making so much noise, but it was heartening to have the captain make light of the situation. Most of the passengers around us laughed, and some even stopped us on the way off the plane to commiserate about when their own kids were young and had bad flights.

The bottom line is that planes are open to the public. Parents are going to do the best they can to soothe an upset child, but unless you're going to charter a private jet, flying comes with the risk of other people disrupting your flight. You can bring your fluffy neck pillow and blanket and plan on a mid-flight snooze, but whether it's a crying baby, a chatty seatmate, or the person who has one to many in-flight drinks, no one's promised a noise-free flight.

Parents on planes are doing the best they can given the circumstances. Even the most well-behaved children are going to have bad days, but I'm not going to let the risk of some in-flight tears stop me from flying with my children.