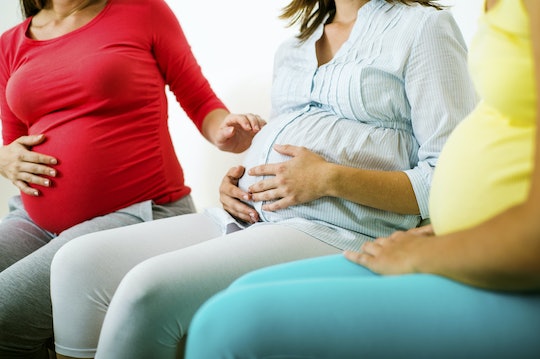 I'm not the only one who believes there should be rules for talking to a pregnant woman about her body, right? And rule numero uno should be: don't. Seriously, just don't do it. Don't tell a pregnant person she's "all belly" or "about to pop." Please resist that urge to touch her without her permission. And by all means, don't tell her she's definitely having a boy or girl. When randos predict the sex of her baby, I guarantee that soon-to-be mom is having some choice thoughts that would leave any intrusive stranger second guessing every life decision they've ever made.

When I was eight months along and massively pregnant, I went to a dear friend's wedding. While getting a pedicure on the toes I could no longer see, my nail technician informed me that I was having a boy. Also, she said she's never wrong. Interesting, since my midwife told me we were having a girl. Another guest took one look at me and remarked, "I carried just like that and had all boys, so I don't know what to tell you." You don't know what to tell me? How about keeping your mouth shut, then? It was all I could do not to give her a big old, Trump-style, "Wrong!"

Considering the total mindf*ck a gratuitous prediction does on a mom, I think minding one's own business is the better part of valor. So, if you're thinking of walking up to some unsuspecting pregnant woman you do not know, take a second to think before you speak. Better yet, consider the following thoughts she'll probably have if you do make some random prediction, and don't say anything at all.