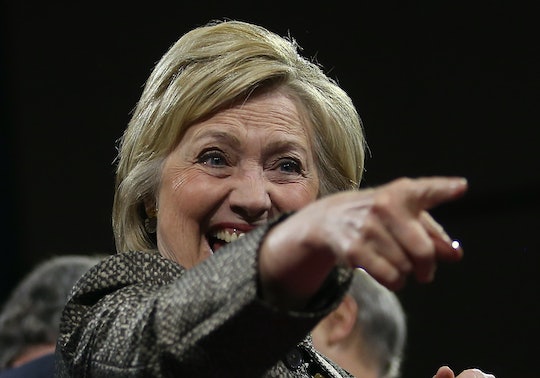 It was bound to happen eventually. Instead of making veiled attacks on former Secretary of State Hillary Clinton's gender, Republican frontrunner Donald Trump said on Tuesday night that the only thing the candidate had going for her was her "woman's card." It's true that Clinton is a woman. But normally, a "card" gets the holder some special treatment or bonus points, which women, historically, don't really receive. The funniest #womancard jokes on social media show just how ridiculous (and not to mention sexist) Trump's comments really were.

If she were chosen as the Democratic nominee for president, Clinton would be the first woman to ever make a solid run for the White House and that excites many voters. She has also made some "women's issues" a huge part of her campaign. Of course, there's an argument that those policies aren't specific to females, but just good Democratic policy in general. Her campaign slogan, "I'm With Her" is a crafty piece of political rhetoric — it highlights her inclusive platforms as much as it urges women to get out the vote for her. So yes, being female is a big part of Clinton's campaign.

That doesn't mean that there aren't many things wrong with Donald Trump's statement (not the least of which is his use of the personal possessive), as if every woman has this magical card to play to get them what they wanted. If that were true, well, Lemonade wouldn't exist among so many other things.

Twitter immediately picked up on this gap between Trump's reality and, well, actual reality.

So, Uh, What Do We Get With This Card?

Can We Use It Anywhere?

OK, Fine. But How About At Work?

Alas, This Is How A "Woman's Card" Usually Works

Trump flippantly talking about playing a "woman's card" has only served to energize Clinton supporters on Wednesday. Clinton quickly responded to his comment at her own rally in Philadelphia on Tuesday night as it gave her a chance to restate some of her big platforms, like funding Planned Parenthood, fighting for equal pay, and women's healthcare. Trump handed Hillary's new campaign slogan right to her. And she's going all in.

Her campaign also tweeted on Wednesday that despite the "flashy headlines" from Trump's statements, she was ready to take his attacks but that "millions of women shouldn't have to." Although it's fun to make jokes about all of the benefits of a hypothetical "woman's card" (and it really, really is), politically, it was gold for Clinton.

Trump couldn't have said anything better about Clinton on Tuesday. If Clinton wants to win the nomination and the eventual election, galvanizing the female base is probably the best way to do it. But doing that without looking like she was playing, well, the woman card, has been tough to do in the current political environment so far. It's a point her campaign has been dancing around. Now, instead of having to insinuate that Donald Trump is a sexist, he went right out there and made Clinton's gender a major talking point.

Cue the Clinton team high-fives. He even gave them the imagery. I mean, "deal me in?" Talk about a feminist anthem. So, sorry Trump, if you planned on hurting Clinton by talking about a mythical woman card. You just handed her one.