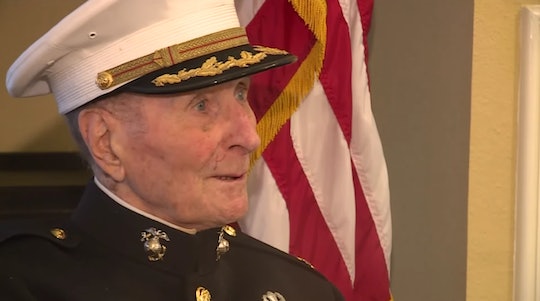 A World War II veteran is hoping you'll be his Valentine this year and help him continue his favorite hobby. An avid scrapbooker, Maj. Bill White, a 104-year-old veteran, asked for Valentine's Day cards from folks living near and far. The Marine Corps veteran has said he plans to save and preserve any cards he receives in his scrapbooks.

"I'll save every one of them like I've been saving little things that have come up until right now and they'll be a personal part of my history," White told KTXL-TV of the cards he hopes to receive this Valentine's Day.

White has been documenting much of his life in scrapbooks, filling the pages with things that tell the story of his rather eventful life, according to CNN. The Marine Corps veteran received a Purple Heart after being wounded during the Battle of Iwo Jima in 1945. Now known to have been one of the major battles of World War II, the Battle of Iwo Jima lasted more than a month and ultimately saw the Marine Corps and Navy forces capture the island of Iwo Jima from the Japanese. According to History.com, almost 7,000 Marines were killed in the battle.

White told KTXL-TV that he'd been injured in an grenade explosion while leading his troop of Marines toward the front lines on March 3, 1945. "When I was wounded, I didn't have any choice in the matter," he told KTXL-TV. "A grenade blow up about six inches from me. The fact that I even survived is something. There weren't too many of us."

White went on to have a 30-year career in the Marines, according to KTXL-TV. Now that he's retired, however, White spends much of his time scrapbooking. "It's kept me busy just trying to locate or keep track of what's happened to me, where, when," he told KTXL-TV.

The Oaks at Inglewood, an assisted living facility where White lives in Stockton, California, were the first to start spreading the word about White, telling one Facebook poster they wanted to see him receive a basket full of Valentines. So, when your kids go to make their Valentine's Day cards this year, perhaps you could ask them to make just one more? Cards for White should be stamped and addressed to:

The Oaks at Inglewood