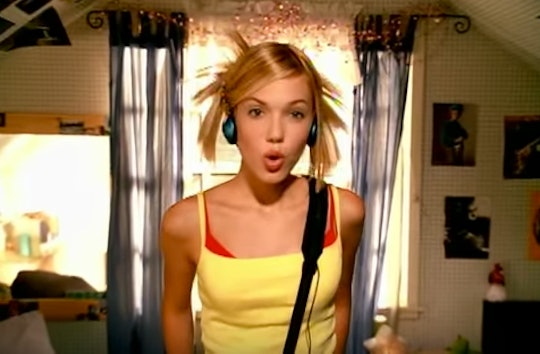 11 '90s Hairstyles To Try On Your Little Girl, Because Retro Is In

The '90s were a time of sporting overalls, wearing glitter lotion, and donning cute (albeit, uncomfortable) jelly sandals. As a preteen and younger sister to a teenager during this decade, the '90s gave me some of the most impressive and fashionable styles that were oh so solid. Aside from fashion, the '90s delivered some interesting hairstyles. In fact, many of the hairstyles can be deemed as timeless and in turn, have developed into '90s hairstyles to try on your girls today.

When I was a kid, my mom kept thing pretty simple with my hair if she was doing it on her own. A quick ponytail or a half-up/half-down 'do was about as good as it got. But if my aunt did my hair or if I went to a salon, everything was fair game. From French buns to finger waves, my hairstyles were lit as I approached my middle school years.

My older sister, who had longer hair than I did, had the ability to pull off many of the popular hairstyles that ruled the '90s. And boy did she make them look good.

Whether you were more of an accessory type of girl or rather rocked the curls, these 11 styles will give you a little inspiration of what to do for your little girls mane that can still be as stylish as they were in the '90s.