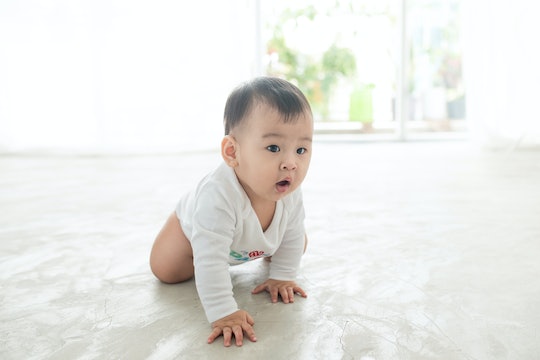 Isn't it fun to think back to the day your baby was born? For our daughter, I was thrilled that our doctor let us select a Monday (repeat C-section here) because we had a whole weekend to get ready for her big arrival. Every day of the week has its perks, however; and Thursday is no different. There are lots of good things that manifest in babies born on the fifth day of the week, so much so that it's worth looking at names that have special significance for babes born on Thursday if that's when your little one is due to arrive.

Derived from the Old English "Thor's Day" after the Norse god of Thunder, according to TimeAndDate.com, Thursday is mostly associated with the Roman god Jupiter throughout the rest of Western civilization as characterized by Romance language's names for the fifth day of the week, like jueves in Spanish or jeudi in French. However, both gods quickly became associated with each other and Germanic languages, like English, kept the day's nod to its Norse roots. Thursday can also be considered the fourth or the fifth day of the week, depending on the cultural tradition, with Slavic and Chinese calendars starting the week on a Monday and cultures descended from Greek or Arabic traditions starting the week on Sunday.

So what can you expect from your Thursday baby? Western astrology places significance on Jupiter, the planet, as having an outsized influence on this day. Those born on Thursday tend to be jovial and infused with the expansive nature of this planet, which embodies good fortune, long-distance travel, higher education and law, according to TheHoroscope.co. Those born on Jupiter's day are optimistic, charismatic, natural leaders who enjoy exploring. They truly embody their description in the classic nursery rhyme: "Thursday's child has far to go." They'll never stop striving to see what's out there and inspiring others to come along for the ride.