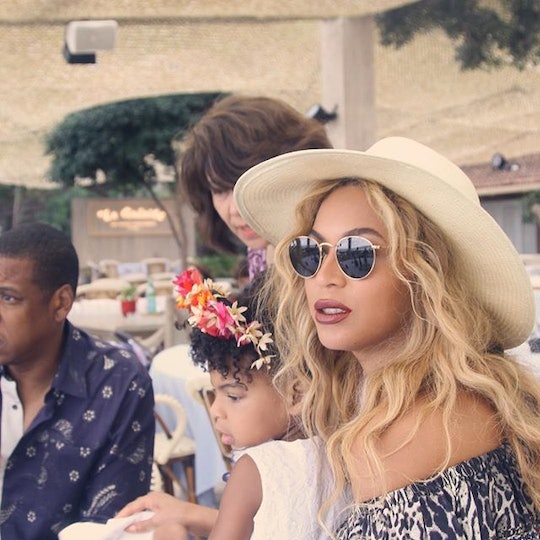 Either way, as a parent, it's always a little weird to see that your kid looks exactly like you did twenty years ago. When people tell me my daughter looks like me, I am gracious and happy to hear the sentiment, but I can never see it. How can an 18-month-old gorgeous baby girl look anything like a 27-year-old walking zombie? And then one day, I glanced at a picture of me when I was little and goodness. There it was. My little clone. I can't stop noticing it now and I'm convinced the two of us should be Dr. Evil and Mini Me for Halloween. I imagine it's incredibly weird for my parents, too. It's like they're seeing me walk around and talk and play all over again.

For these 11 celebrities, they have the same feelings. These guys and gals have their own clones in the form of their children and the resemblances between the younger version of their self and their kiddos is incredible. I guarantee these celebrities are doing a double take every time they flip through the photo album.

Reese Witherspoon's daughter Ava Phillippe is gorgeous in her own right, but if she hopped in a time machine, she totally could've passed for her mom. Elle Woods the second? Definitely.

Two queens? I can live with another Beyonce in the world. I wonder if little Blue Ivy has an alter ego like Sasha Fierce, too? Or is it just mama's eyes, nose, hair style, and sweet face that they share?

Those lips! Those eyes! Tiny Hilary Duff (she's the littlest on the Easter Bunny's lap) is a replica of her little boy, Luca.

I think it's the teeth that really do it for the twinning between Gwyneth Paltrow and her daughter, Apple. And those sweet smiles.

Our favorite fresh prince looks a whole lot like he's about to whip his hair back and forth in this throwback baby picture! Will Smith as a baby looks exactly like Willow Smith as a baby and it is too cute. Those ears!

She may already have a double in the form of her sister Tamera, but Tia Mowry (she's on the right if you weren't as big of a Sister, Sister fan as I was (ps. what's wrong with you?)) as a young one is the spitting image of her little boy Cree.

The genetics already insured that Chelsea Clinton would be a successful woman some day, but they also made sure that the baby pictures of her and her mom were almost identical.

She may be Sean Penn's daughter, too, but Dylan Frances Penn looks a whole lot like her mother, Robin Wright. Even without matching locks, the two still have similar lips, noses, and bone structure. Gorgeous.

Even with totally different hair colors, Olivia Wilde's baby picture could basically dissolve into the exact same picture of her little guy, Otis. I think it's the eyes and that adorable button nose.

Ron Howard passed along more than just his talent and star power to daughter Bryce Dallas Howard. Look at those smiles! And freckles! And red hair! It shouldn't surprise me that the two of them are some of my favorite people in the entertainment business — who better to take after then the one and only Richie Cunningham?

It's weird how much Kate Hudson as a youngster looks like Goldie Hawn, right? It makes sense that mothers and daughters might share some physical attributes, but those noses, chins, cheeks — everything is the same!