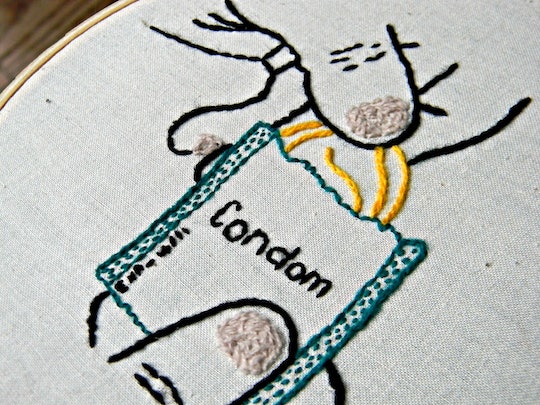 Safe sex is a no-brainer, no matter what your relationship status is. But condoms aren't exactly the sexiest. I mean, let's be honest — they're look like a slimy balloon, they smell like latex, and they're kind of gross when sex is done. But if you're practicing safe sex with condoms, whether it's to prevent STIs or pregnancy, they're a necessity, and knowing a few condom hacks to make sex safer will only make sex better.

Condoms, even without tips and tricks, are already incredibly effective at keeping you safe. According to Planned Parenthood, when it comes to HIV, using a condom makes sex 10,000 times safer than not using a condom. That's a huge, right? Planned Parenthood also notes that condoms are one of the most accessible forms of birth control and can cost as low as four cents per condom.

Although one study found that condom use was highest among unmarried adults, even those in a monogamous relationship might be using them. No matter your reasoning, if condoms are a part of your sex life, you don't have to treat them as some kind of mood-killer. Sure, they're preventing pregnancy and STIs, but that doesn't mean they can't be sexy. With these 11 condom hacks, you can keep your sex life disease and baby-free without losing the heat of the moment.