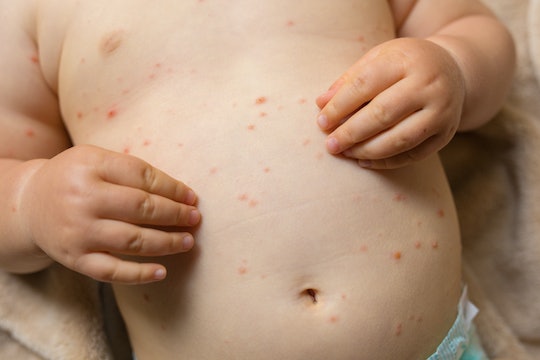 My sons all suffered through the chickenpox. Not because I didn't want to vaccinate them, but because the vaccine was not made available when they were young. It became a bit of a thing among parents at the time, everyone trying to get their kids to contract the chickenpox when they were little and supposedly resilient enough to withstand the side effects. Because we just didn't know what could happen. And this chills me to this day, especially after reading about a little boy having a stroke from catching the chickenpox, as reported in new research. Parents need to know what can happen, because forewarned is forearmed. I wish I had known.

More Like This
Survey: Just 30% Of Parents Would Get Their Kids Vaccinated Against COVID-19 Right Away
Um, "Rusty Pipe Syndrome" Is A Thing, & Every Breastfeeding Mom Should Know About It
I've Missed You So Much! You Still Can't Touch The Baby.
Experts Offer Tips On How To Wean — Whenever You’re Ready

Chickenpox is caused by the Varicella zoster virus, according to The History Of Vaccines. It's identifiable by a red, itchy rash, fever, and blisters that can form on the skin and on mucus membranes (in the mouth, nose, throat, and vagina). For decades the chickenpox was extraordinarily common, especially considering how easy it is to pass from person to person. Happily a vaccine was invented in 1995 to help prevent chickenpox, according to The History Of Vaccines.

While the varicella vaccine has been available for more than 20 years and has helped to drastically reduce instances of chickenpox, there are some people who still choose not to vaccinate their children against the disease. Perhaps because, as Dr. Tina Tan, a professor of pediatrics at Northwestern University’s Feinberg School of Medicine, told TODAY, people still often see chickenpox as relatively non-threatening. "Everyone thinks it’s a minor illness," she told TODAY.

But Dr. Tan noted that are also a "number of serious complications." One of those complications? Experiencing a stroke. While rare, strokes can happen in people suffering from chickenpox. According to TODAY, Tan explained:

Basically, the chickenpox virus infects the large blood vessels in the brain and causes inflammation in them. The blood vessels can scar and that can decrease blood supply to the brain, which can lead to stroke.

Such was the case with an 11-month-old boy recently, according to a report by the Journal of Pediatrics. The little boy was brought to the hospital by his mom after she noticed that he seemed to be struggling with the right side of his body, according to the report. His right arm and leg in particular seemed to be significantly weaker than his left side, and he had a harder time with movement on that side of his body as well. Doctors determined that the toddler had a stroke, and that he had contracted chickenpox from his unvaccinated siblings at home, as explained at Pediatrics.

It's important to remember a few things about the chickenpox virus. First of all, it's contagious long before any physical signs make themselves aware (like that red rash some of us might remember from our own childhood). So if you choose not to vaccinate your child against the chickenpox, you could well be exposing other children to the virus who are either too young to have been vaccinated or other people who are vulnerable to the virus like pregnant women, according to Kids Health. In other words, you are making a choice about their health and well-being that is not yours to make.

Second of all, strokes might be relatively rare, but there are other complications that can arise as a result of the chickenpox vaccine. Children can contract pneumonia, neurological complications, or bacterial infections because of the lesions on their skin, according to the Centers for Disease Control and Prevention.

There's a reason all of the states require young children to be vaccinated against chickenpox. It's not like catching a sniffle or getting a bit of the flu. It's more serious than people realized. And children need to be protected.