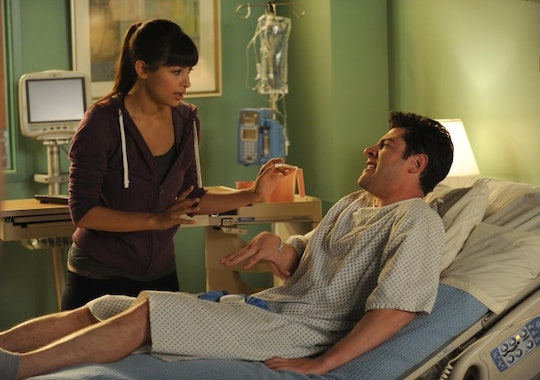 11 Of The Most Common Sex Injuries, Because Sex Hurts So Good

Salt-N-Pepa said it best — you can't talk about sex (baby) without talking about all the good things and the bad things that may be. Especially when some of those bad things include one you or your partner suffering from one of the most common sex injuries.

When I was a pre-teen and had no idea what sex was, I efficiently scared myself into being a virgin by reading the "most embarrassing sex stories" column of every magazine I could find. I felt sick over stories about a girl's jaw locking up after giving her boyfriend a BJ and Girl On Top sounded like the worst position ever after hearing too many tales of breaking a guy's penis with your own pelvis. But unless I was willing to pledge lifelong celibacy (spoiler alert: that didn't happen), I might as well have been educated, right?

According to the Telegraph, a UK study found that 18 million people have suffered from either an ache or a strain due to sex. And of those people, 40 percent claimed they didn't realize they were injured until the next morning because they were so into the sex, they hadn't noticed their own pain. Apparently some of those pains are just too much to bear as five percent claimed to have taken a day off work to recover from their injuries.

It's hard to know exactly what the most common sex injury is because, as Debby Herbenick pointed out to ABC News, no one wants to admit the real reason they're injured. But if you're curious about the sex injuries you may suffer from or just want a reason to rag on your co-worker when they call in sick after a romantic weekend, here are 11 of the most common sex injuries. Just remember these two words — worth it. (And maybe "ice it", too.)

More Like This
This Is What Happens To Your Vagina When You Stop Having Sex
How To Approach The Topic Of Emotional Labor With Your Partner
How Do I Rediscover My Sexuality When I’m Completely Touched Out?
Tips To Co-Parent With A Stepparent Successfully