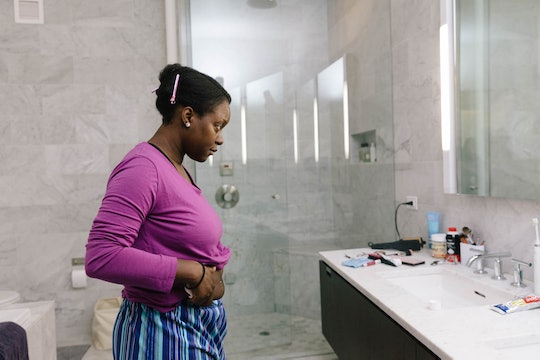 11 Signs You May Be Pregnant (Besides A Positive Pregnancy Test)

Ah, the dreaded two week wait. When you’re trying to conceive, there’s nothing quite like the time between ovulation and your potential period as you’re anxiously excited while constantly on edge, monitoring every single symptom you feel in your body. The worst is trying to decipher whether those symptoms are PMS symptoms or pregnancy symptoms, because of course, they’re super similar. Luckily, there are some signs you may be pregnant besides a positive pregnancy test. Although some women may experience these symptoms before they start their periods, every once in awhile, these symptoms turn out to be signs of early pregnancy.

According to Dr. Gerardo Bustillo, OB-GYN at Orange Coast Medical Center in Fountain Valley, California, “In a study looking at pregnancy symptoms in 221 women attempting to conceive, 60 percent of women who did become pregnant experienced some signs of pregnancy as early as five to six weeks after the first day of their last menstrual period, and 90 percent were symptomatic by eight weeks.” So, if you have a positive pregnancy test, you can trust those results if you know the other signs and symptoms of pregnancy, like bloating, tender breasts, and nausea.

Unfortunately, a lot of the early pregnancy symptoms mimic your typical PMS symptoms, so it's not super easy to tell if you're with child or if you need to go get tampons, especially if you haven't taken a pregnancy test yet. Bustillo agrees, telling Romper, "These symptoms tended to begin abruptly and occur daily. They were not specific to pregnancy, however, because they also occurred in 9 percent of non-pregnant cycles."

Ugh. So what's a TTC woman to do? Pay attention to these 11 signs you may be pregnant besides a positive pregnancy test. They can help you feel a little more confident in those double lines or convince you to take a test already.