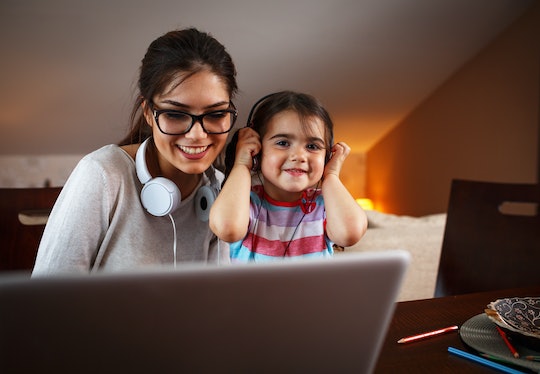 I've always been a fan of music (I mean, really. Who isn't?), but having a daughter really made music an integral part of our day. Before I've even finished buckling her car seat, my 2-year-old asks me to turn the music on, and every night, my husband and I take turns singing some of her favorite songs to her before she falls asleep. I've been turning to music instead of screen time during the day as she plays, and luckily, I don't have to do a lot of curating — some of the best Spotify playlists for kids are easily accessible and feature songs I wouldn't have even thought of.

It's no secret that music is connected to a child's development. Think of all the pregnant women who put headphones to their swollen bellies, hoping their child hears a strain of Mozart and becomes a genius at 3 years old. Think of all the music classes for babies who can't even hold a rattle yet, and how music instructors continue to clap, sing, and dance to introduce them to music. There have been countless studies done on music and babies, including one from the University of Washington concluding that having music on during play sessions with 9-month-old babies improved their brain's processing of both music and new speech sounds. In short? Music is important. But does it matter what kind of music you listen to? How is it actually making a difference in your child's life?

Michael Saul, an elementary school music teacher in New Jersey, tells Romper via email that while music itself is important, it's more about spending time with your child as you listen. "There is scientific evidence suggesting that music does improve cognitive function and learning in infants, as well as foster experiences for bonding between children and their parents," Saul says. "As a music educator I fully agree with this and can honestly say, 'Yes, music is good for your child. Period.' At the moment, we are living in a great time of technology where it seems like we just want the quickest, easiest fix for literally everything. This is where I have to say that although music is great for your child, maybe just sitting in a room listening to Mozart isn't the actual answer to ensure they become a genius."

Saul goes on to suggest that it's not really the type of music you're listening to that's most important, it's the time you actively spend interacting with your kid that helps. "The greatest thing you can do for your child and their development is to just spend time with them. Not just in the same room with them, but actually with them, interacting and engaging. Can music help with this? Of course, but it doesn't have to be a playlist approved by pediatricians," he says.

Saul also notes that there is a huge connection between music and memory, as shown in many recent documentaries on music and its affect on people with Alzheimer's. He suggests that simply playing music you enjoy and spending time singing to your child can have a big impact on their future. Think of all the big events in your life like birthdays, weddings, even funerals — they all have music attached. Saul goes on further to explain that nearly every song or rhyme you learned as a child taught you some important formula or fact, and you probably still sing it to yourself as an adult. "There is a rhythmic component to that, linking our memory to music," Saul says. So making memories with your kids? They can happen with or without music, but music may just make them a little more memorable.

"While I can't prescribe any specific music for parents to look for, I can suggest that you listen to what you love, and your child will not only enjoy it, but they will enjoy getting to spend time with you while you're smiling, dancing, and singing, as opposed to that 2 a.m. feeding when you just want them to finish that bottle and go back to sleep," Saul says. "Use music as a way to engage your child in games and activities to build their coordination, sportsmanship, and in many cases, basic counting skills. Many of the lessons I do in my classes consist of simple games set to folk songs — haven't we all heard that kids learn best through playing? The most important thing is that you, the parent, are interacting with your child. Don't think that you can lay them in a Pack 'n Play with your iPad nearby playing Pitbull's baby enhancing Spotify playlist and that's going to make them a better person."

So ready to get started? Whether you lean towards the Hamilton soundtrack, country music, or even Pitbull, you can make a playlist that works for you and your family. You can download favorites from iTunes to create your own playlists or try out Pandora to curate your own perfect station. If you're a Spotify fan, you're in luck — there are plenty of kid playlists already put together for both you and your family to enjoy, including these favorites. Think of the memories. (Especially if you're busting out your favorite dance moves.)