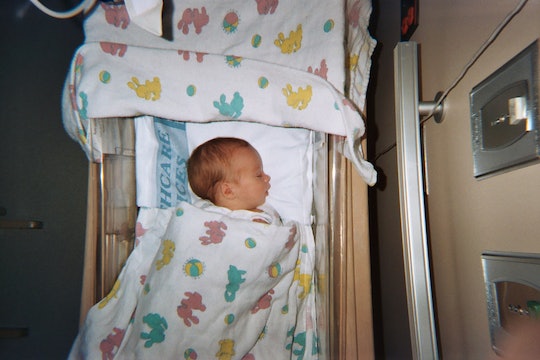 I'll never forget my last visit to my doctor before I had my baby. Up until that point, I'd had a fairly normal pregnancy. I mean, I had an unplanned pregnancy, but it was normal and healthy and barring the madness of processing all the change that was befalling my life, things were going swimmingly. Every previous check-up had been perfect — my baby and I were healthy and strong and more than ready to be formally introduced. But it only took two short minutes for our perfect track record to become a thing of the past.

When my doctor checked the heartbeat of my baby at this particular appointment, it sounded noticeably different. Instead of a steady thud, my son's heartbeat sounded more like Bob Marley was playing a set of bongo drums inside my belly. The doctor kept the sonogram wand on my stomach a lot longer than what he normally did, confirming my anxieties that my perfect pregnancy was over. "Let's have a look at him before you leave." he said. So I was escorted to another room where we could get a live look at him.

A few minutes later my doctor came back in the room with a different ultrasound machine, one that was for images, not just heartbeats. He placed the wand on my stomach and immediately received a jab from my son who wanted no part of the prodding. He scanned his brain, his lungs, and finally stopped at his heart to record the awkward rhythm of my son's heartbeat.

"It's probably nothing; just a basic arrhythmia. But just in case, we are going to have you closely monitored and your baby will likely spend some time in the NICU." he told me. As any mother would, I automatically jumped to the worst conclusion and panicked every remaining second of the week left in my pregnancy. My son was born right on time shortly after that, but my husband and I didn't have much time with him before he was carted off to the NICU. His birth was absolutely terrifying to me. I was scared and sad and completely unprepared in every way. I had prepared for everything but this.

I learned a lot over the following 24 hours, and the months of monitoring my son's health that followed. His time in the NICU was short, but the lessons I took away will stay with me forever. Here are 11 things you should know (that I wish I had known) if your child is (or is going to be) in the NICU.