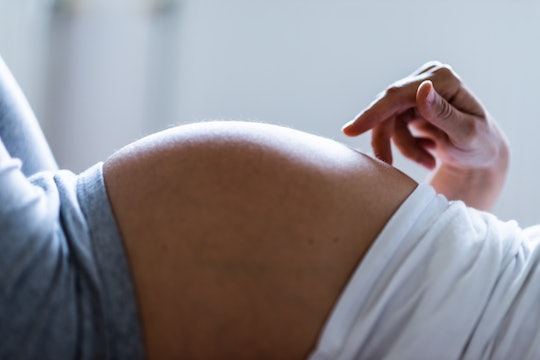 11 Things Moms With Gestational Diabetes Are Tired Of Hearing

For most pregnant people, gestational diabetes is something you know vaguely about, are tested for, pass said test, and don't have to worry about again unless you have another child, at which point the cycle will likely repeat. However, for approximately 18% of expectant mothers, that test will come back saying that they have, in fact, developed gestational diabetes (GD). Well crap, you guys. Now there's a lot to learn and a lot to do and a lot of things moms with gestational diabetes are tired of hearing.

The good news about GD, such as it is, is that once you know you have it, you can adjust your diet and work with your health care provider to manage it and, as a result, it probably will not cause any significant issues for you or your baby. (Hooray!) The bad news? It's annoying. So, so, so annoying. You get used to it, but in my experience you don't really get used to how annoying it can be, at times. Expectant moms are, usually, worried about a bunch of stuff that really doesn't matter; when you have GD you get to fret about all that stuff, plus figuring out why your blood sugar was 116 when you woke up on some random morning.

You also get a little weary, I found, about explaining gestational diabetes to everyone else. Honestly, it would be hard to explain anything you're barely getting a handle on all this and have been only reading up on for the last couple of weeks. The expansive majority of people who never have to worry about GD? They don't have a clue. That's fine, because why should they? However, their well-meaning cluelessness can often be a thorn in the side of many a GD mother, which is annoying because you're already getting poked with sharp objects on the daily. Here are some of the things pregnant women with GD find even more annoying than having to give up doughnuts for the remainder of their pregnancy: